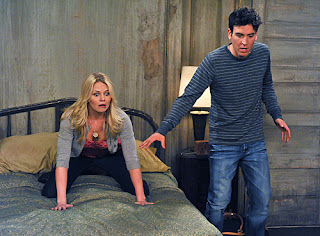 There’s an inherent problem in this season of How I Met Your Mother: Ted and Zoey.

In the past few episodes, HIMYM has done a good job of convincing us that Ted and Zoey should not be together. That they aren’t right for each other. And we know it doesn’t end well, thanks to one of those flash-forward-but-really-still-back scenes. The problem is, all of this has been built on the presumption that at one time, Ted and Zoey seemed like a good idea. And I don’t think most of us were really on board with that.

Think about it. If Ted and Zoey had seemed like a match made in heaven back when they met, if they had any chemistry together at all, if we’d been even slightly rooting for them to hook up, then all this would be much more interesting. Instead, there’s just a feeling of “Get on with it, already!” I want them to break up, and I want them to break up now. It’s supposed to be painfully obvious to the viewers that they’re not good together, and it is. But it’s not supposed to be painfully obvious to Ted and Zoey, yet every time they have a storyline together I ask myself “Why haven’t they broken up yet?” They are not convincing me that they still like being in a relationship. There’s no spark, no oomph, no lust. Which sucks, because there are plenty of examples of opposites, or even enemies, attracting. For goodness sakes, have none of these people seen You’ve Got Mail? Joe Fox put Kathleen Kelly out of business, yet you could still practically taste the chemistry between them. Luke and Lorelai had their differences over the years on Gilmore Girls, but they still had that great back-and-forth. I know, these are couples who were meant to end up together and Ted and Zoey are not. But I think Ted has had better chemistry with every other girl he’s dated on HIMYM compared to Zoey.

I know that the HIMYM showrunners are not ready to show us The Mother, and while I disagree I can accept that. But what I’d like them to do is put Ted in a relationship that is actually enjoyable. Just because Ted’s not going to marry the girl doesn’t mean we have to dislike her. After all, Ted faced quite a few obstacles with Stella as well. Excluding Robin, because she’s an actual character on the show, I haven’t liked anyone since Victoria, and that was in season one. If they’re going to drag out this whole Mother thing, put Ted in a relationship with someone I like, make me sad when they break up, and then cheer me up again when he meets The Mother.

In Monday night’s episode of HIMYM, we continued to debate the fate of The Arcadian. I am so over this hotel, it’s not even funny. Just tear it down already! If Zoey wins, what will the result be? The Arcadian won’t be restored, it will just continue to sit there, dilapidated and rat-infested. And the thing is, I don’t see how we could possibly root for Zoey to win. We don’t care about Zoey. Even now that she admitted she grew up in the hotel, I don’t care about her fight to keep the building around. I care about Ted, because he’s the character I’ve spent six years getting to know. We know he’s always wanted to build a part of the New York skyline. This is his chance. I don’t want to see him robbed of that.

At the end of the day, I just don’t think Zoey has added anything to the show. In a lot of ways, HIMYM has had a good season. The stuff with Marshall and Barney has been fantastic. But if it weren’t for Zoey, I think this could have been a great season. I do not want to see her in season seven, and I really hope that we don’t.

As for the rest of the episode, I thought it worked. Why? Because it involved everyone other than Ted and Zoey. Yes, it involved The Arcadian a little – Marshall joined Zoey’s side, sparking a major feud with Barney. But, as we saw over the course of their drunken night together, it was about way more than that. It was about Marshall seeking his role in life after the death of his father, and it was about Barney dealing with abandonment issues thanks to his own dad. It was about Marshall quitting the job that Barney got him, where they had fun together all day.

I loved all the scenes where Lily and Robin tried to decide what booze would be best to get Marshall and Lily reconcile. I’m not a Robin/Barney ‘shipper, but seeing her talk about Barney with the same level of familiarity that Lily talks about Marshall did move me a little closer to that camp. The flashbacks proving what specific booze would do to different members of the gang was hilarious – Ted beat-boxing thanks to bourbon, Marshall trying to beat up his own reflection thanks to gin, Barney getting real thanks to red wine, Lily hitting on Robin after a couple martinis, Robin and absinthe. It was all great.

Another great gag was Robin and Lily defending their booth at McLaren’s. So great. Unfortunately, Lily and Robin’s project was a bust – the boys made up over beer but were back at their fighting the next morning. So how will they reconcile?

What did you think of “The Perfect Cocktail”? Do you think we’ll kiss Zoey goodbye by the end of the season? It’s been acknowledged that we don’t be meeting the mother, so I think that’s the least they could do for us. Now, check out these highlights:

How I Met Your Mother: This is a cold war, do you know what you're fighting for?
https://haligonia.ca/how-i-met-your-mother-this-is-a-cold-war-do-you-know-what-youre-fighting-for-37243/