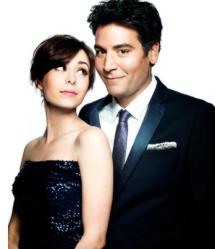 After feeling completely let down by the series finale of Dexter, I questioned whether I should be bothering with this final season of HIMYM. Both are shows I once love and grew to almost hate, out of pure disappointment.

But it’s the final season, and if I don’t watch I’ll just end up reading obsessively about it, unable to go on not knowing how things end. So I’m watching.

I’d actually heard good things about the first few episodes of the season from critics who had advance screeners, but I was bummed when I saw the episode was an hour long. And, right at the half hour mark, I found myself thinking “Come on now, get on with it.” HIMYM loves to take its time.

Some of the episode was funny, mostly because I’m a few weeks away from my own wedding and the jokes about wildcards really hit home. I liked Marshall’s adventures OK, and I enjoyed that Lily ended up meeting The Mother first. I think she seems charming, and a good fit with Ted.

But here’s where it really got me: the scene where Ted was sitting there, alone, doing a crossword puzzle, and then we saw Ted a year from now with The Mother. I loved that scene.

Maybe I still have a little bit of hope left for this show.

How I Met Your Mother – Wedding Weekend
https://haligonia.ca/how-i-met-your-mother-wedding-weekend-82679/