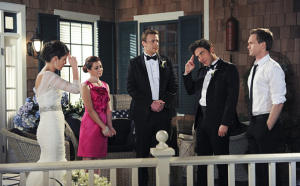 The series finale of HIMYM was on tonight. After nine seasons, the longest story ever told finally concluded. I haven’t really enjoyed the show for a few years, and stuck in until the bitter end out of… curiosity? Stubbornness? Masochism? My blogs about the show became increasingly frustrated, until I finally gave up writing about it at all.

So, obvious spoiler alert here. If you have not watched the series finale of HIMYM, don’t click through. If you have, well let’s go.

Here’s my review: I (expletive) hated it. I honestly, truly hated it. Here’s the gist, for those of you who gave up watching long ago. I applaud you. 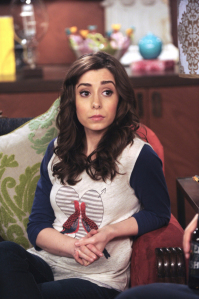 rried. After a few years they divorced. The gang grew apart. Barney had a kid. Other people had kids. Ted and The Mother married after having two kids and a years-long engagement. They were blissfully, obnoxiously happy. Robin was still in love with Ted, because UGGGHHH.

Oh yeah, and then, just like many came to predict at some point, THE MOTHER FREAKING DIES. Ted finishes telling his teenaged children the “story of how I met your mother” six yearsafter her death, and they tell him the story is really about how he’s in love with “Aunt Robin”.

So Ted shows up at her apartment with a blue French horn, like nothing has ever happened.

It’s not just that the mother dies, although I think that was a terrible move. It’s putting Ted and Robin together after years of dragging out their romance, putting her with Barney and then not and then back and then not. Asking us to give a damn about any of these relationships, and then just throwing them into a blender and saying “Here! We’re finished! Did we trick you? Hope so!”

This season, we barely got to see any of The Mother. What we did see was delightful. It was a little glimpse at how the show could have been good. What we did see was a weekend in hell, where our five main characters fought much more than they laughed. By the end of this season, I hated them all so much. I was glad the show was over because I never wanted to see them again.

My friend Melanie 100% predicted this ending. And a while ago, too. Then the theory began to pick up some steam. And episode a few weeks ago confirmed that the show was heading in this direction – the mother would die. And knowing the mother would die, we all knew the writers would end up putting Ted with Robin. Itgave the fans who thought Ted and Robin worked together as a couple the ending they always wanted. I’d say they ruined it for the rest of us, but this show jumped the shark LONG ago. They simply threw away any chance for going out on a good note. 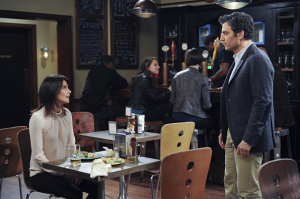 Why should I believe Ted and Robin belong together? Why wouldn’t their relationship fail for the same reason hers and Barney’s did? Why would I believe Robin would want to be a stepmother? Or, for that matter, why would I believe that she’d rejoin the gang after having drifted so far apart? Did she think “Oh good, Ted’s wife kicked the bucket so now I finally have my second (or third or fourth or whatever) chance with him. Better start showing up for family dinners!”

It doesn’t help that Robin comes across as a frosty bitch for most of the final episodes. And that even years later, she’s still pissed to see Barney hitting on women and Ted with a lovely wife. DUDE! YOU DUMPED BOTH OF THESE MEN! STOP. WHINING.

I’m not mad because it was a sad ending. I mean, it’s a sitcom. Wrapping up by killing your title character, even if it’s one we barely got to see, is rather dark. But shows can do dark, that’s not why I hated this so much. I hated it because it was a cop out. Because I don’t think it was true to the characters. Because it wasted a perfectly good relationship by hardly showing us Ted and his wife together. Because it belittled that relationship by ending with “Psych! His soulmate was Robin the whole time even though we spent hours and hours trying to make you believe her and Barney as a couple.”

I could write more, but I’ve been ranting long enough. If I have any cohesive thoughts this week, I’ll write another post. But for now, I’ll throw it over to y’all – take to the comments and tell me what you think!