As I mentioned in a previous post, our last vacation was spent travelling with Cokebaby’s brother and sister-in-law in England with the intent of meeting up with Cokebaby’s sister, brother-in-law and their two kids en route to Ireland. 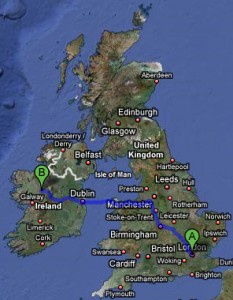 Our destination in Ireland was just north of Galway in a quaint little place called Williamstown. According to Google Maps it’s approximately 768 km from London.

The plan was to meet at Holyhead via train and then take the ferry across where we’d then cab it to Dublin airport to pick up our car rental and then drive across Ireland to our B&B. A longer day of travel could not have been planned.

With the availability of cheap flights offered by the likes of Ryanair why, might you ask, did we take the ferry across? Apparently, because it’s romantic. Also, Cokebaby’s family made the same crossing almost exactly 22 years before and this was a revisit of that trip so I had to compromise.

News flash: I get seasick standing in puddles.

As soon as the ferry left the dock the motion sickness set in. Thankfully, someone had a Gravol pill handy. Although it made me feel groggy and doped up at least I wasn’t going to throw up the overpriced meal I consumed on board.

We landed in Dublin several hours later to the rainiest day we would see during our entire trip. By the time our crew got to the taxi stand there were none to be had. After waiting the requisite amount of time (between trying to call a cab company and speaking with a desk clerk) we finally made our way to in two cabs.

Our cabbie, though a seemingly lovely man, somehow decided it was appropriate to throw in some disparaging remarks against Nigerians during our suddenly uncomfortable ride to Dublin airport. Obviously, he never received the e-mail I did from that Nigerian accountant offering a tidy sum of money for sending an advance fee that his company needed urgently.

We traded the cab in for our own vehicles at the airport. Now here’s where the fun began. Driving on the other side of the road, even for passengers is not a laughing matter. We were all nervous, no, scared to death of somehow finding ourselves driving into oncoming traffic. The “A-Team” as we referred to ourselves, came up with an instant plan.

I put myself in charge of posted speed limits and other road signs and Cokebaby was the navigator. Even still there were a couple of occassions where a turn was made wrong (but thankfully corrected quickly and without oncoming traffic being involved).

Here, for your viewing pleasure, is a quick video we took to illustrate the incredibly narrow roads and obstacles we faced while driving in the Irish countryside:

How to waste an entire day in travel by using multiple modes of transportation
https://haligonia.ca/how-to-waste-an-entire-day-in-travel-by-using-multiple-modes-of-transportation-4411/