London is a great city on a number of levels: it has great cultural attractions, a diverse population with many wonderful fine and casual dining spots, and ample places to see, shop, and be merry if you’re a tourist. Since this was our second visit to the city, Cokebaby and I took a day to ourselves while his brother and sister-in-law set off on a day on the Hop On Hop Off bus in London. 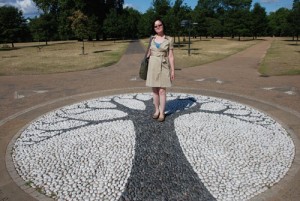 "This mosaic has been designed to commemorate Reformers Tree, a venerable tree, which was burnt down during the Reform League riots in 1866."

We opted to have a quiet day of casually taking in sites that we either missed or really enjoyed on our last visit. Our day started off at Hyde Park which is a lovely spot for a walk and any number of activities you can think of. What I love about the parks that I’ve been to in Europe is the true use of them as civic spaces. People crowd to their parks, families play together, couples make out on the lawns, seniors gather, etc. Hyde Park is no exception. There’s not just a bike lane but also a horse lane! Seeing all the off-leash dogs around made me homesick for Tofu though who was off having a vacation of his own.

Another perk about visiting London is the amazing public transit system. We purchased a day pass on £5.10 which would have been great but the eastbound line we were walking along wound up being shut down. That meant we hoofed it for a lot longer than expected which would leave us quite exhausted by the end of the day. But it was a gorgeous day for walking around the city and we took advantage of a cafe, Indian restaurant, and pub along the way.

Covent Garden was one of our stops where we stopped in at Whittard of Chelsea for tea to bring back with us. They have a wonderful assortment of loose leaf, herbal, and powdered teas along with cups and other accoutrements. I have a particular weakness for the Amaretto Explosion blend.

After lunch (don’t worry foodies, I’ll have a special post all about dining at the end of this series) we stopped in at The National Gallery. I’m usually all over this sort of cultural excursion but frankly, I was beat. The artwork did not get absorbed with exception to the Impressionists (my favourites). So after a fairly quick tour of the paintings, we set off to meet the in-laws at the agreed upon location. 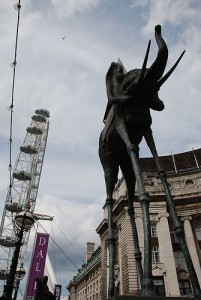 Aka the big, crazy elephant statue

Now, London is a big and bustling city. Since this was the first visit to the city by the in-laws we needed to meet at a spot that was easily visible without being overly crowded. We picked Salvador Dali’s Space Elephant sculpture (aka the big, crazy elephant statue) that stands between the London Eye and the Aquarium as our meeting spot.

From here we set off on a boat tour of the Thames which would stop at Greenwich (another World Heritage site!) where Cokebaby wanted to visit the Royal Observatory. It was something he had missed out on our last trip and instead of a night out at the theatre, we chose to revisit this part of the city and the gorgeous buildings of the Old Royal Naval College. The in-laws were exhausted from their adventures around London so we stopped in for a bite to eat at a local pub and local brewer.

And it’s just as well we did because as it turned out the Royal Observatory was closed.

Maybe the third time will be a charm?

Coming up next week: why I staunchly believe that boats are for pilgrims as we set forth onto the Ireland leg of the vacation.

A free day about London and on the case of the elusive Royal Observatory at Greenwich
https://haligonia.ca/a-free-day-about-london-and-on-the-case-of-the-elusive-royal-observatory-at-greenwich-4344/