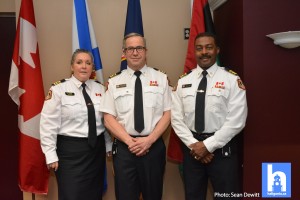 The promotion of 3 deputy chiefs took place within the HRFE today in Dartmouth. 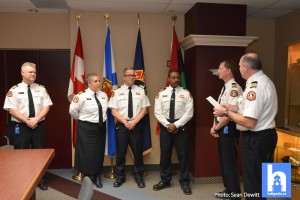 These positions were advertised across Canada initially, but all the promotions ultimately came from within the HRFE. 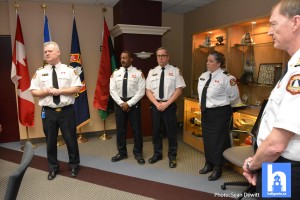 The newly promoted will help continue the strong leadership and structure of the fire services in the HRM.

Here’s a little bit of info on each one. 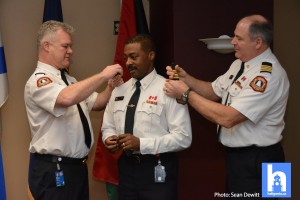 Corey became a career member of Halifax Regional Fire & Emergency 21 years ago. His pursuit of higher education and desire to contribute to the organization was obvious. Corey advanced from firefighter to Captain in 2008, and on to his most recent role as District Chief in 2013.
Corey has a thirst for knowledge and learning. He has studied Public Relations at Mount Saint Vincent University and Public Safety Administration through the Justice Institute of British Columbia, holds a Bachelor of Sociology from Mount Saint Vincent University and a Masters in Public Administration (Management) from Dalhousie University. Corey also completed a certificate in Fire Service Leadership from Henson College and is a certified NFPA 1021 Fire Officer Professional Qualification Level II.
In addition to his responsibilities with Halifax Regional Fire & Emergency, Corey has been an active in community initiatives and currently serves as a member of the MacEachern Institute for Public Policy and Governance Research and the Nova Scotia Human Rights Commission Partners for Human Rights. Corey has served as Chair of the Halifax Regional Fire & Emergency Outreach Committee for the past three years and in 2017 he was the recipient of the CAO’s Award of Excellence for his work in promoting Diversity & Inclusion in the fire service.
Prior to becoming a career member of Halifax Regional Fire & Emergency, Corey spent several years as a volunteer firefighter and held the rank of Captain. Corey’s knowledge of firefighting tactics, his leadership abilities, and his experience in both the career and volunteer sector will serve HRFE well as Corey assumes responsibility for fire operations. 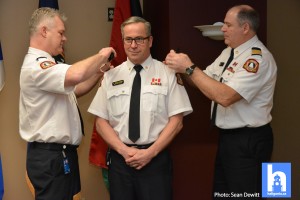 Chuck has been a dedicated member of Halifax Regional Fire & Emergency for over 34 years, rising through the ranks of Captain, Platoon Chief, Division Chief Training, and holding the rank of District Chief since 2012.
Chuck has furthered his education in management through training at both Dalhousie and St. Mary`s Universities and is a certified NFPA 1021 Fire Officer Professional Qualification Level II and ICS Canada Instructor. In addition to his achievements as a leader in fire operations, Chuck has twice been the recipient of a Director`s Award, first in 2007 for his work in the Training Division, then again in 2009 for his role in the design and construction of the command training centre. In 2016, Chuck received a Corporate Award of Excellence for his work on the ICS Conversion Project. In his personal time, Chuck has also managed several small businesses over the years and is a Master level competitive swimmer.
Chuck`s broad knowledge of fire suppression, operational deployment of firefighting

equipment, personnel and apparatus, along with his significant management experience within the fire service and in private enterprise, provide a strong foundation of leadership for fire operations.
** Nadya-Lyse Pare – Assistant Chief 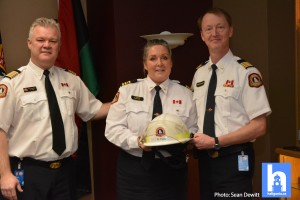 Nadya-Lyse began her service as a career member of Halifax Regional Fire & Emergency, almost 25 years ago after serving 5 years as a volunteer in 2 different departments. She has taken every opportunity to develop her skills, achieving technician level or instructor level in every rescue speciality, while also becoming a relief engineer for all classifications of fire apparatus in HRM. She moved to the role of Station Officer in 2008 and most recently to the role of Acting District Chief.
Nadya-Lyse has actively promoted the principles of diversity and inclusion in the fire service throughout her career with HRFE, acting as a diversity officer, instructor and chair of the Outreach Committee. Nadya-Lyse is fluently bi-lingual, of French and Métis decent, a Restorative Justice Facilitator, and recently completed her training as a Certified Diversity Professional through Diversity Training International University. She has studied sociology and anthropology, workplace rights investigations and creating cultural change.

Nadya-Lyse has represented Halifax Regional Fire & Emergency at several national and international conferences and has been a keynote speaker at several events as well. Nadya-Lyse has served as a member of the Nova Scotia Human Rights Commission’s Partners for Human Rights, volunteers her time with Camp Courage and Feed NS. In her spare time, Nadya-Lyse has also operated a private consulting business teaching respectful workplace practices and is Justice of the Peace for the province of Nova Scotia.

Nadya-Lyse will take on the role of Assistant Chief in the Performance & Safety division, where her knowledge, experience and passion will help guide us in achieving our vision of a diverse and inclusive fire service.

Congratulations to all three newly promoted.