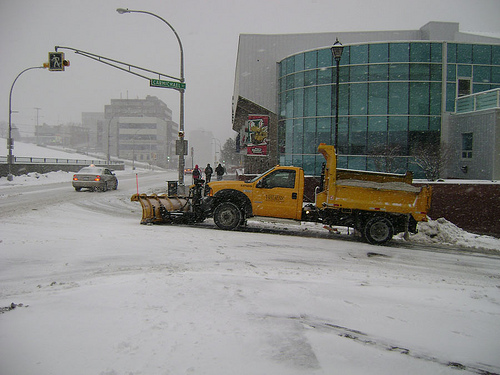 (Halifax) – The union that represents Halifax Regional Municipality’s outside workers believes it’s time for HRM to go back to the drawing board on its snow and ice removal policies.
CUPE Local 108 President Mike Young says, “Staff have had to listen to the mayor state publicly at least twice this winter that our response to storms has been insufficient.
“But we believe what Mayor Kelly and council really need to start addressing is the current mix of municipal employees and private contractors for snow and ice removal.  We believe this model – which includes several, small contractors – is inefficient and at the root of our current problems,” says Young.
The union points to the issue of salt use by private contractors as one example of operational inefficiency.  Says Young, “How can you monitor all of these contractors to make sure they are leaving the depots with legal loads of salt? And how do we know that they are using the correct amounts of salt or salting at the right times and at the correct rates?”
Says Young, “Private contractors, by their very nature, are looking for ways to save money and maximize profit.  Municipal employees are not subject to those temptations.”
“We know that HRM residents are quite frustrated right now with the status quo.  We are urging them to contact their councillors and suggest that it may be time to revisit this heavy reliance on small, private contractors,” says Young.
Source: Release