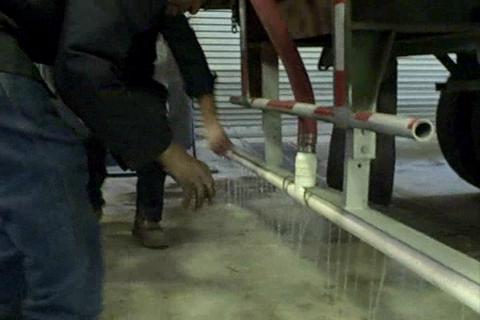 Jan. 12, 2012 – HRM will introduce a liquid anti-icing strategy for clearing snow and ice from streets on a trial basis this year. The method involves using a mixture of salt and water called liquid brine to pre-wet the road’s surface before the snow falls, resulting in more effective and efficient snow clearing operations.
“We’ve taken a close look at best practices for salt management on streets during the winter to determine the best approach for keeping our roads clear and safe for residents,” said Ken Reashor, Director of Transportation and Public Works. “Studies have shown liquid brine to be a low-cost, effective method with little impact to the environment.”
The plan is to spray liquid brine, a 23 per cent solution of salt and water, on key trial roadways in advance of potential snow or black ice situations. The first trial streets will be in the capital district in the West region and arterials in the East and Central regions (Portland Street, Main Street, Sackville Drive, Beaverbank Road) and will expand as capability increases.
“Salt needs time, temperature and moisture to work,” explains Gordon Hayward, HRM’s Winter Works Superintendent. “In normal applications, salt is applied to the roadway during snow and will draw heat from the road’s surface in up to –8 degree weather. The salt then combines with the moisture creating brine, which helps melts the snow and ice.”
Applying salt in advance of snow helps to create a brine layer on the road surface that prevents snow from bonding to the surface so it can be more easily removed through ploughing and reducing the chance of the snow pack turning to ice.
Liquid anti-icing can be done up to 48 hours in advance of snowfall and is used as a preventive measure. It is not effective once snow has begun to fall. It remains one more tool in the toolbox to help provide safe roadways during the winter season.
For more information on HRM’s salt management strategy, visit www.halifax.ca/snow.
Source: Release