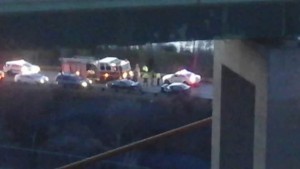 At approximately 8:25 pm Halifax Regional Police responded to a report of a head on collision near the Barrington St off ramp from the MacKay Bridge.  HRP has learned that a black Mazda 6 driven by a 25 year old man with a 23 year old female passenger had just left the MacKay Bridge and were travelling Southbound on Barrington St when a Toyota Tercel, that was travelling Northbound on Barrington St,  driven by a 75 year old woman, crossed into the Southbound lane and struck the Mazda head on.  The 75 year old woman was transported to hospital by EHS paramedics with non-life threatening injuries.  The 25 year old man and the 23 year old woman also attended hospital as a precaution.  A decision on charges will be made upon the completion of the investigation.  Traffic was re-routed by HRP around the collision scene for a period of time, however, all streets have now been reopened.