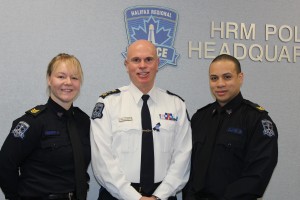 A promotional ceremony was held this morning at Police Headquarters.

Kim Robinson and Bobby Clyke were promoted to the rank of Sergeant today at 10 a.m. by Chief Jean-Michel Blais.

Sgt. Kim Robinson is a 15-year veteran who has worked in the Patrol Division and in the Integrated Criminal Investigation Division, spending the majority of her time in the Special Investigation Section before heading back to Patrol this past January.