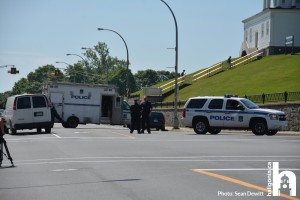 At 11:04 a.m., Halifax Regional Police responded to a report of a suspicious package call in the 1700 block of Brunswick Street in Halifax. Responding Officers located a suspicious package and subsequently shut down vehicle and pedestrian traffic between Duke and Sackville Streets.

Officers with the Explosive Disposal Unit attended the scene and determined there was no threat. The package was determined to be a cooler style bag and nothing was located inside. All streets have been re-opened to traffic.

Police thank the concerned citizen and continue to encourage citizens to phone Police if they see anything suspicious.