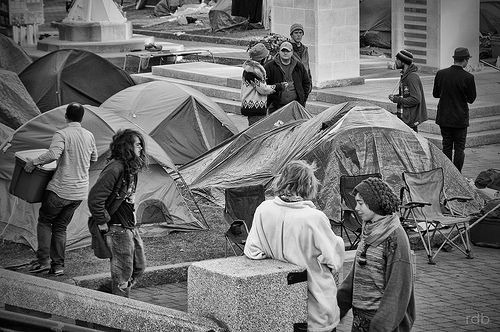 Halifax Regional Police are looking for a way to better monitor the goings-on and safety at the Occupy NS sites, and they may have found it. According to the Chronicle-Herald  HRPD spokespeople have confirmed that security cameras will be installed at Parade Square and Victoria Park, where protesters have temporarily taken up residence until after Remembrance Day.

The article states that the cameras are in response to complaints from the public about noise at the encampment and weapons. They are also a way for the HRPD to reduce its man-hours spent at the sites while still being able to monitor it 24/7 without the need for as many foot patrols. Feedback from protest organizers as quoted in the article is mostly positive. One spokesperson for the movement, Cory Samoila is quoted as saying "I can understand how it can help them and us."

But there are some concerns about privacy. Tell us your thoughts Haligonia: Should safety come before the right to privacy, given that protesters are camped out in a public place? Do you think HRPD man-power is better used elsewhere than round the clock foot patrols?