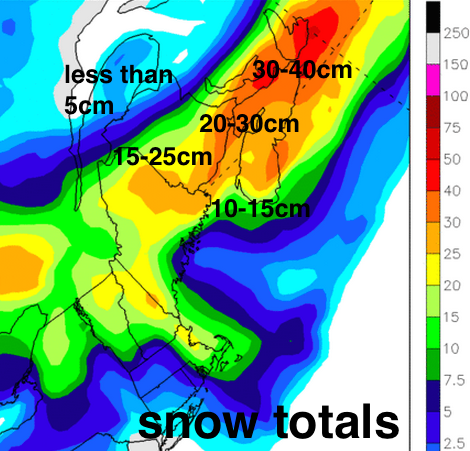 The rather wintry pattern is persisting over Eastern Canada.  Consequently, the low pressure area developing off of Cape Cod Saturday evening will provide another taste of winter, starting Saturday night.  Light snow will begin over SW Nova Scotia and SW New Brunswick late Saturday afternoon.
This snow should not have much impact on any evening plans.
By midnight, the snow will intensify, with heavier snow covering all but northeastern New Brunswick and Cape Breton by Sunday morning.  This heavier snow will spread across Cape Breton by lunchtime.  As it does, the snow will be changing to rain or tapering off in SW Nova Scotia.
Visibility may also improve in Halifax with a brief change to rain around noon.  Might be a good time to clear snow.  Light snow is likely to return in the evening in Halifax. 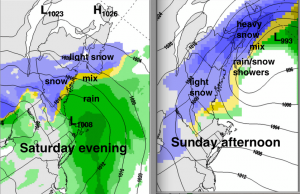 Winds will increase with gusts to 70-80km/h over the southern Maritimes.  Therefore, visibilities will be reduced as blizzard-like conditions will accompany the heavy snow. 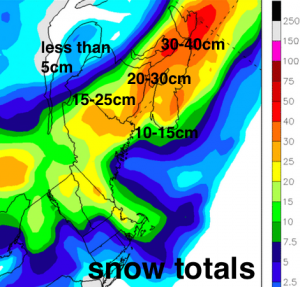 The expected track of the low south of Nova Scotia  would result in the heavy snow totals over much of the southern Maritimes  Regardless of the snow amounts, the combination of snow and wind will result in significant and hazardous impacts.

Environment Canada has issued a Special Weather Statement to advise the public to begin preparation. Warnings will be issued this afternoon and/or Saturday morning when there is more certainty as to the extent and severity of these impacts.  Nevertheless, you should start to think about preparations for the following possibilities:

With Prince Edward Island and Nova Scotia beginning March Break, there are likely a large number of folks with travel plans this weekend.  Anyone driving to Maine or Quebec would benefit from a Friday departure to get at least part way there since southern Maine and the Quebec City area may be messy Saturday afternoon. Road travel would not be advised on Sunday.

Saturday’s flights should be fine, with perhaps some delays for flights connecting through Montreal or Ottawa.

Direct flights may be able to depart Charlottetown Sunday morning or Sydney into the early afternoon before conditions deteriorate.  All flights departing/arriving Halifax and New Brunswick on Sunday have the risk of being delayed or cancelled.  While the visibility may improve Sunday afternoon, flights will depend on aircraft operations and runway conditions.

Ferry traffic will be impacted by the strong winds on Sunday.  The ice in the Cabot Strait may continue to be packed tight into the Cape Breton coast on Monday,

The strong winds on Sunday may cause some outages in the southern Maritimes.  Any mixed precipitation or wet snow that could contribute to this risk is most likely along the Atlantic coast of Mainland Nova Scotia.

There is a risk that gusty east to northeast winds may produce storm surge flooding or ice pile-up along east or north facing coasts of Northumberland Strait and the Gulf of St. Lawrence with Sunday afternoon’s high tide. At this point the risk doesn’t appear to be extremely high, but coastal residences should remain vigilant.

I’ll tweet updates on Saturday and Sunday, as well as updating this post should there be any significant changes.