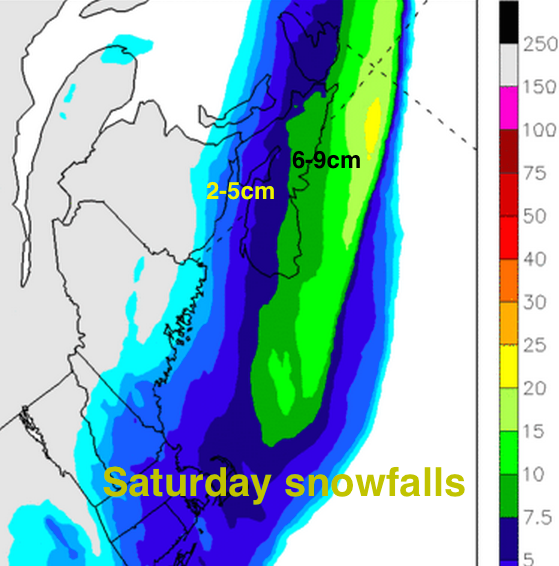 The rain system that gave some heavy amounts along the Atlantic Coast of Mainland Nova Scotia is sliding southward today.  This has added to the weight of snow, exceeding the design criteria on some roofs (the roof of my former High School has collapsed).

I expect there may also be some reports of local flooding, and any ice covered r0ads or walkways will be slick …. so take care. 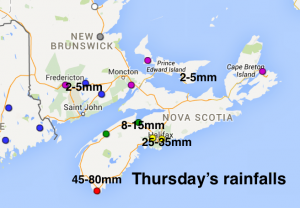 The precipitation has tapered off this in New Brunswick and PEI, but some light rain will persist in Nova Scotia.   As the system continues sliding south tonight, the patchy rain will change to wet snow over Nova Scotia, and maybe clip eastern PEI.

On Saturday, another system will develop along the precipitation band south of Nova Scotia.  Snow will spread back over Nova Scotia, and persist into Saturday night.

Any wet snow today or tonight shouldn’t amount to much accumulation.  Nevertheless, some roads may be slippery as temperatures drop to near or below the freezing mark.

On Saturday and Saturday night, the new system will result in higher snowfalls, especially along the Atlantic Coast of Nova Scotia.  The forecast for amounts are a bit tricky, and you’ll probably be hearing some ranges in the forecast.  I’m thinking most areas of Nova Scotia will get less than 10cm… but it’s not an easy prediction. 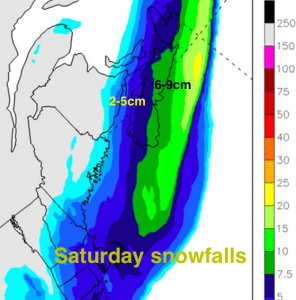 On Sunday, skies will clear for a nice day… the sun will feel warmer than the actual air temperature…