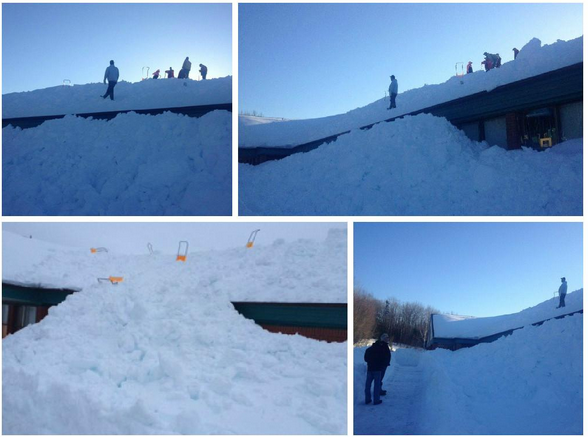 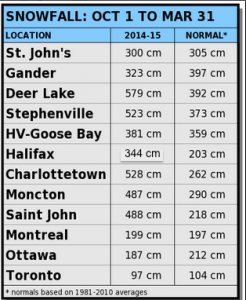 This is Canada.  Our transportation, construction, and water management systems need to consider snowfalls.

Road and runway clearing is affected not only by the depth of snow, but also the density (wet heavy snow vs fluffy light snow that blows easily).

Building codes are established based on statistical calculations using snow measurements for a given city.

Flood managers, farmers, municipalities, and hydro-electric companies need to track snow accumulations, which when melted, contribute to the management of the resulting water.

Our 2015 winter has been particularly extreme, with the majority of the snow in many Maritime locations falling in the months of February and March.  The 278cm two-month total recorded at Stanfield International Airport in Halifax is the most snow ever recorded in these two months.

The almost 500cm recorded so far at the Saint John airport has far exceeded the previous snowfall record of 427cm set in 1963.

Both Charlottetown and Moncton airports are just shy of their all-time snowfall records set back in the 1970’s.

These heavy snowpacks have resulted in a number of structural failures 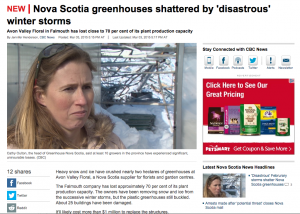 Rinks and Fire halls have had roof damage: 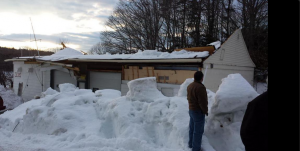 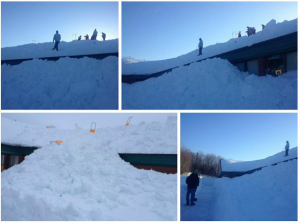 While I am aware of injuries related to homeowners clearing snow from their roofs, I think we have been fortunate there have not been any significant injuries or loss of life from collapses.

Now that Springlike temperatures are becoming more common, as well as rain more likely than snow, homeowners and emergency managers and others are monitoring the river ice and snowmelt for possible flooding.

The attached measurements of the snow water content by CoCoRaHS volunteer network (Community Collaborative Rain-Hail-Snow) shows that most communities have at least 150mm or equivalent meltwater in the snowpack, with some extremes over 350mm.  If a typical rainfall is 25mm (an inch), the release of 250mm stored in the snowpack is equivalent to ten rainstorms.  Hence the importance that the melt is somewhat gradual. 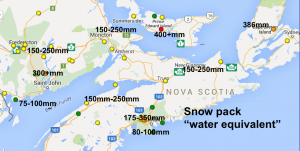 Given the importance of snow observations for our safety, and the overall impact on the economy, one would expect government to play an important role.

In my opinion, we are fortunate to have the CoCoRaHS volunteers, since these provide the best coverage, most detailed observations, and in many cases, are best representativeness of what has fallen.

A few things to reflect on:

Airports, which are typically exposed to the wind, are not very good locations to measure snowfalls.  Airport snowfalls are measured by Flight Service Specialists, whose main responsibility is to aviation related activities.  Environment Canada compensates NavCanada (our air navigation service, which is a private, not-for-profit company) for these observations. Meanwhile, NavCanada is automating observations at airports.  For example, the weather observations at Fredericton are largely automated.  There are no longer snowfall measurements taken at the Fredericton Airport.  Other airports will eventually run into the same challenge.

Snow observations from Environment Canada climate stations are almost all automated.  Essentially, these stations measure the weight of the snow that falls into the measuring device.  The estimated depth is then achieved through a calculation (not a measurement).  There are some Environment Canada sites that use sonic sensors to measure the snow depth automatically.  It’s a tough job.

Airports and Environment Canada are not measuring the equivalent water in the snowpack that is so important for flood risk assessment, and risk to structures (like roofs).  This is not in their mandate, even though it is important to our safety and security.  Environment Canada is however supporting the expansion of the CoCoRaHS network, given the value of these volunteers.

When snow loads were increasing, insurance companies, emergency managers, and the media were discussing this.  However, there is no systematic program to monitor snow weights, and homeowners are left with the challenge of trying to find a contractor or clearing the snow themselves.  I hope. after this year, public structures like schools, rinks and hospitals systematically monitor their snowpack, so that roof clearing takes place before the risk elevates.

Official snow depths are either taken at airports, by automatic stations, or they do not exist. They do not necessarily reflect what you get in your driveway.

In times of restraint, governments limit activities to their official mandate, even if that is not in the public interest.

The public is benefitting from the precipitation measurements from the CoCoRaHS volunteers.  More volunteers are welcomed: CoCoRaHS Canada

There is a lot of water in the snowpack; much of which will be released in the next 10-15 days with temperatures mostly above zero, some passing rainfalls, and the sun, which is as strong as it is in late August.

Record Snowfalls: do we really know how much?
https://haligonia.ca/httpyhzweatherguy-carecord-snowfalls-do-we-really-know-how-much-105067/