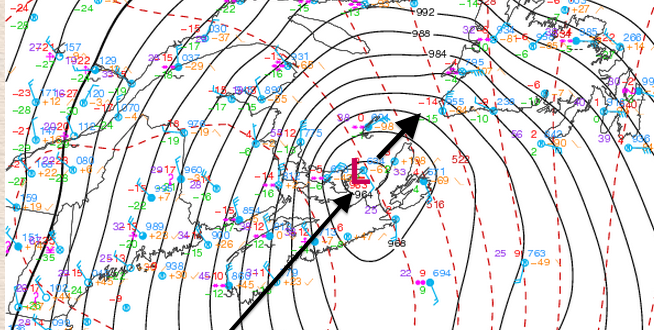 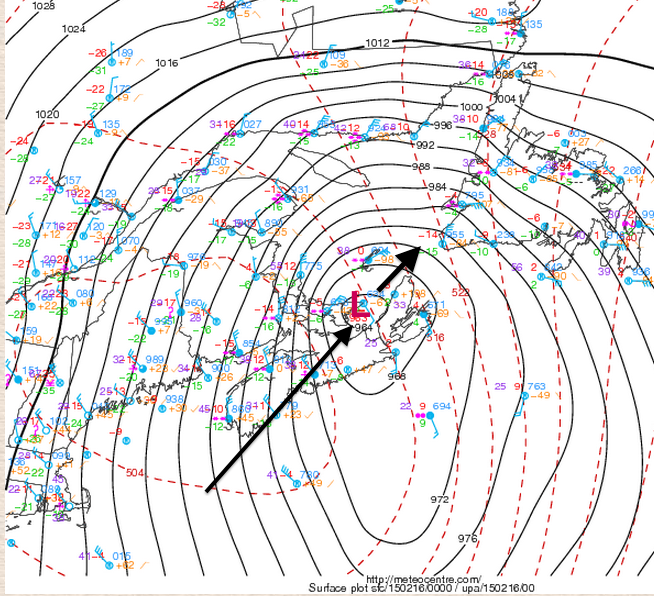 The rapidly intensifying low moved from Cape Cod across Nova Scotia into the Gulf of St. Lawrence this morning.  To the northwest of the storm track, blizzard conditions were widespread over Southern and Eastern New Brunswick, Prince Edward Island, and parts of western Nova Scotia including the Annapolis Valley, and central and northern Nova Scotia (Cumberland, Colchester, and Pictou Counties).

Snowfalls were excessive and visibility was near zero for extended periods of time, closing major highways.  The attached chart includes a preliminary summary of snowfalls.

Over Eastern Nova Scotia (east of the storm track), the heavy snow changed through freezing rain, ice pellets and rain.  Snow amounts and overall impacts were not as severe.

The city of Halifax (and Antigonish County) was right along the track of the storm, resulting in an incredible variation in precipitation types.  Hammond Plains recorded 32cm of snow, while reports from the downtown area were closer to 10 to 15cm.  Downtown rainfalls were in the order of 30mm; causing substantial flooding in many downtown streets of Halifax and Dartmouth. Then temperatures dropped very quickly after lunch, freezing the slush and rain, making further clearing very difficult.

As I mentioned in my previous post, the weight of the additional snow (and rain) is adding to snow loads on decks and roofs.  In fact, part of the roof on the Halifax Curling Club collapsed Sunday morning.  Get expert assistance of you are concerned with the weight of snow.  National Research Council has some advice.

Winds were very strong, with a number of gusts over 100km/h, especially along north-facing coastlines., which contributed to power outages. The combination of these strong winds and low pressure were a threat for ice-piling in areas adjacent to the Gulf of St-Lawrence and Northumberland Strait.

Blizzard conditions persist this morning around the Gulf of St-Lawrence.. with the weather improving and winds gradually diminishing this afternoon and evening.

As temperatures turn mild today and Friday, wintry precipitation will not be in most people’s minds.  However, Friday night, as rain spreads southwards across the Maritimes. a cold ridge of high pressure over Quebec will spread cold...

A very intense storm passed across the Maritimes Thursday night 04-05 January 2018.  There was significant media attention associated with this storm, given it’s impact with snow, wind and storm surge along the eastern seaboard of the...