While Saturday was one of the nicest days in June, the afternoon temperatures in the high teens or low twenties were still slightly below normal.

Summer begins just after lunch on Sunday.  However, the first few days of summer will not be too summer-like.

Four days after making landfall in Texas, the remnants of Tropical Storm Bill continued to have quite a bit of circulation on Saturday afternoon as it moved east through the state of Kentucky. 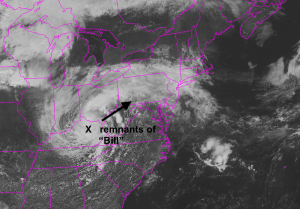 This system will continue eastward on Sunday, and spread rain into western sections of the Maritimes in the afternoon.  Heavy rain will then spread across the region overnight and into Monday.  The rain will end, or taper off to showers Monday morning. 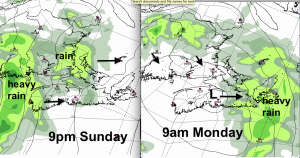 With some tropical moisture remaining in this system, a number of communities will receive over 50mm of rainfall.  While it’s uncertain still, even amounts of over 75mm are being predicted by some weather models.

Environment Canada has issued Special Weather Statements for the southern Maritimes.  It is likely rainfall warnings will be issued on Sunday; so keep an eye.

As the system moves off on Monday, the airmass will remain somewhat cool for most of the week.  A band of rain or rainshowers in likely on Wednesday and perhaps again on Saturday.

The good news… as July approaches, the computer models are finally predicting beach weather with daytime highs in the mid 20’s and mild nights. 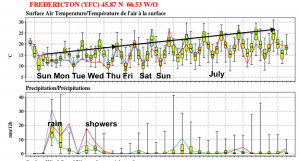 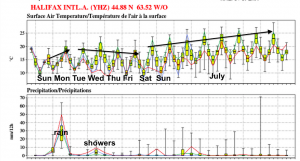 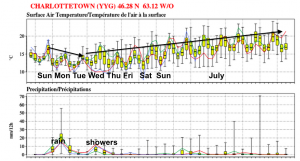 Start of Summer: any beach weather after the remnants of “Bill”?
https://haligonia.ca/httpyhzweatherguy-castart-of-summer-any-beach-weather-after-the-remnants-of-bill-108109/