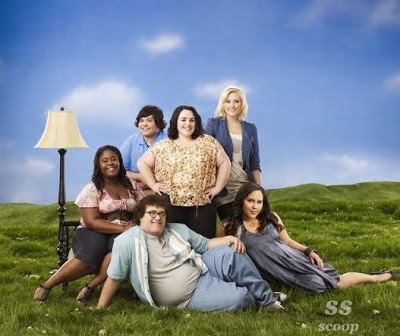 As summer winds down (sniffle), so are my summer TV shows. I was a little worried about what I’d find to write about this summer, and I think there have been some definite successes and failures. I’ve loved doing DVD Flashback Friday so much that I’ll probably continue with it into the fall (send me posts on TV on DVD that you’ve been watching!), and The Bachelorette and Bachelor Pad proved to be exactly the kind of trashy summer TV that I wanted. A couple regrets? I didn’t enjoy Last Comic Standing as much as I thought I would. And though I started out liking America’s Git Talent, the show has dragged on for so long that I’ve actually started to hate it. But one show that really took me by surprise was the ABC Family series Huge. I started it on a whim and it turned into my summer obsession. The second-last episode aired on Monday night, the first in a two-part arc called “Parents’ Weekend”.
In “Parents’ Weekend” we finally got to figure out a little bit about the lives of the campers outside fat camp. It was a great episode that dealt with a lot of teen issues. Ian’s parents, who always fight, were completely getting along during their visit – and then they told Ian they’d decided to get a divorce.

Expectations were a big theme. Trent, the jock, seemed to be under a lot of pressure to live up to his dad’s expectations – that he would play a lot of sports, date the hottest girl, be the most popular guy. Alistair also struggled with his parents’ expectations. He even went so far as to pretend he was dating Becca when he saw how happy the idea made them. Watching he and Chloe interact with their parents showed how often Chloe has the spotlight.

Huge still left quite a bit to the imagination, though. Will’s parents bailed on the weekend, which meant that we didn’t get to meet them and Will didn’t get to deliver her scathing critique of their insensitive hypocrisy. Becca’s parents also didn’t visit. We learned that her grandmother had come the year before, but had since passed away. That explained a lot about Becca, but I hope we get to learn whether her parents are in the picture. The biggest mystery surrounded Amber. We learned in previous episodes that she has a difficult and stressful home life, and upon meeting her mother we could see why. Amber is clearly the adult in the relationship, but we don’t know why. Alcoholism? Mental Illness? I hope we find out before the end of the season. Amber certainly finds dealing with her mother draining, and at the end of the episode she resorted to food for comfort and snuck off with Will to dig up the buried candy from earlier in the summer.

With Huge coming to a close, I’m left to wonder about a few things. Will camp be over at the end of the season? None of the kids have lost much weight (although that’s difficult to portray, since they’re actors) and the chronology of the episodes hasn’t suggested that they’ve been there for two months. Will we ever meet Will’s parents? Will Will ever confess her true feelings to Ian? Will Becca admit what’s bothering her about Will? And what about George and Amber? There’s a lot to be wrapped up with only one episode left.