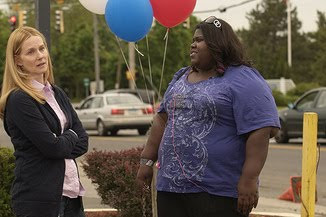 I reviewed the premiere episode of Showtime’s new series “The Big C” last week and said I really liked it. It was smart, funny and different. This second episode was also great, but it also exposed a crack in the series: how long can Cathy continue on in not telling her family that she’s dying?

It makes for very interesting TV. Cathy is dying from cancer and has re-evaluated her life. She’s dealing with her diagnosis in a revelatory, almost maniacal way. She’s sad – she’s most certainly sad – but she’s also determined to make the most of her last year or so. That means ditching the husband who makes her want to pull her hair out, “raising the hell” out of her son so that she doesn’t leave behind a belligerent, slobby teenager who will grow into a belligerent, slobby husband, and speaking her mind to anyone and everyone. And it’s glorious. But you also have to wonder, how will these characters feel later?

Imagine her husband. He’s a lazy, schlubby, whiny little man. He leaves the kitchen cupboards open every time he gets something from them. He asks Cathy to go to couples’ counseling and then asks if she will call and make the appointment. He gets drunk and urinates in their backyard. So she kicks him out, and I don’t blame her – but how will he feel about that when she’s gone? I respect Cathy for not wanting her final year to be a pity party, for not wanting her husband to change his behavior only because she’s dying. But he has a right to know, doesn’t he?

And then there’s Cathy’s son. He’s a teenage nightmare. He’s rude to his mother, he’s lazy and self-centered. He’s a youthful, obnoxious version of his father. So Cathy realizes she needs to straighten him out while she still has time. She tells him he can’t go to soccer camp. That decision results in a fantastic scene where she chases after the school bus with a paint gun, but it also results in her son telling his mother that she’s crazy and he hates her. Surely he wouldn’t hate her if he knew. Surely if he knew his mother was dying, he would agree that six weeks at soccer camp is not a good decision. But he doesn’t know.

Moral questions aside, the show is still great. The scene where Cathy asks her young, handsome doctor to assess the hotness of her body had me cracking up, and I love the relationships Cathy is developing with her cranky neighbor and her sassy student (played by Gabourey Sidibe). I can’t wait to see how crazy Cathy will get, or if she’ll come to her senses eventually.