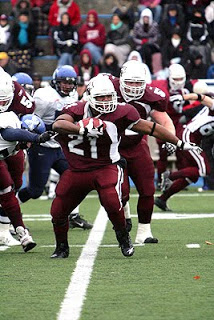 This Friday’s showdown between Saint Mary’s and Saint Francis Xavier at Huskies Stadium lost a little bit of lustre on Saturday when the X-Men were routed at home to the Bishops Gaiters.
Instead of a classic undefeated #1 vs. a hungry #2, we now have two teams tied for first playing for a bye and home field advantage for the AUS Championship.
Not a bad substitute.
The winner is essentially guaranteed of a one loss season and first place, the loser will be destined to finish 6-2 and have to host lame duck Acadia in the AUS Semi-final, then travel to play in the championship game.
After this weekend, SMU and X will finish their season vs. Mount Allison and Acadia respectively. An upset by either the Mounties or Axemen is highly unlikely.
The X-Men beat the Huskies way back at the start of September, 24-19, on a beautiful day in Antigonish. The storyline of the game was the lack of focus and sense of entitlement from the Huskies, said to be reading too many newspapers and thinking they could waltz their way to the Uteck Bowl.
Since then the Huskies have looked more impressive each week, blowing out weak sisters MtA and Acadia, while winning tough games vs. Mcgill and Sherbrooke. The X-Men were starting to make believers of AUS sceptics, until they collapsed vs. a Bishops team they were expected to beat soundly.
Advantage: Huskies.
Saint Mary’s comes into the game on a 5 game winning streak. The Huskies have outscored their opponents during the winning streak 185-81. Quarterback Jack Creighton has been steady after a disastrous 4 interception effort at STFX to begin the season. Creighton has thrown for over 300 yards twice and has shown the ability to spread the ball around to multiple targets.
The emergence of the Jones brothers running attack has propelled the offence. Devon and Tristan have combined for 796 yards; Devon has 6 rushing touchdowns while Tristan averages over 7 yards per carry.
The Huskies defence is holding opponents to 16 ppg and hasn’t surrendered more than 24 points all season.
Special teams have been the X factor for SMU all season. Placekicker Justin Palardy is 17-20 in field goal attempts en route to becoming the AUS record holder for successful kicks made in a career. Palardy is also perfect on 21 Point after attempts. Kick returner Jahmeek Murray is averaging 17 yards per kickoff return and nine on punt returns.
Steve Sumarah has to like his chances. His biggest challenge this week may be to make sure the Huskies show up on Friday night ready to play.
Focus was not a problem for Gary Waterman’s X-Men, until last week when his team became victim to the classic “trap” game. The X-Men had to be looking ahead to the big game this week in order to lose so badly at home to a team they should have been able to beat with a solid effort.
Despite the road-bump, there’s no reason to believe X can’t win in Huskies Stadium.
QB Steve Snyder is the favourite to win AUS MVP. The fifth year senior has averaged 317 yards a game and will likely finish the season with over 2500. Fellow senior, James Green of Halifax, has been solid on the ground, averaging 3.5 yard per carry for a total of 307. The trio of Peter Giannikopulous (35 catches), Akeem Foster (27), and Mark Metulynsky (27), form a talented and dynamic group of receivers.
The X-Men have been solid on defence all season, allowing only 14 ppg. Tom Lynch and David Skillen have been monsters with 42 solo tackles between them, while Dylan Hollohan has 5 interceptions to lead the secondary.
The game may come down to field goals, in which case the advantage clearly goes to the Huskies with Palardy, who may be the best placekicker in the country.
Excitement is building for what should be an incredible game. There will be lots of X rings in the crowd, with proud Xavier alumni attached. The Huskies student body have been coming out in full force so far this season, and the “old dogs” alumni section will be packed as always.
Based on the way the Huskies have been getting better each week, and the way they handled a decent Mcgill team in Montreal last weekend, I have to go with the home team in this showdown.
Take the Huskies by 7points in what should be an incredible football game.
Kickoff is at 7:00 at Huskies Stadium on the campus of SMU. For some strange reason, Eastlink has chosen to show the Acadia/MtA game on Saturday so the only way to see it is to head down to the stadium.