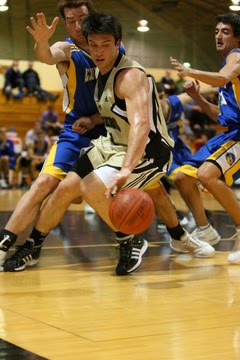 Huskies on Haligonia; Battle of Elite Point Guards at the Tower 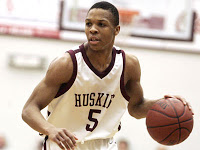 It’s a battle of two of the best point guards in the country on Tuesday night at the Tower as Joey Haywood and the Huskies host Simon Farine and the Dalhousie Tigers.
The Huskies are looking for their first win of the season after stumbling out of the gates to an 0-4 record, while the Tigers will be looking to remain undefeated with a 4th straight victory.
Game time is 8:00 and will be webcast on www.live.haligonia.ca. Mavs Gillis and Bill McLean will have the call from the Tower.
Meet the Tigers
Record: 3-0, 10 points for second place.
Head Coach: John Campbell
Players to Watch:
#4 Simon Farine– Perennial AUS first team all star averaged over 20 points per game last season.
#21 Joe Schow – Has averaged a double-double for the Tigers since transferring from Calgary two seasons ago. Leads the Tigers in scoring in 2010 with 16 ppg
#22 Juleous Grant – North Preston native transferred this past year from Northern Oklahoma. Athletic and excellent three point shooter.
Tigers Notes:
Tigers are coming off a 59-52 victory in Antigonish over the X-Men…..Combo guard Stephen Lopez is back after a season off due to injury……Long time starter in the post Sandy Veit is back for his fifth season…..Head Coach John Campbell’s coaching staff consists of the legendary Dave Nutbrown, the former Head Coach of Acadia, and Tom Gillespie, the former Head Coach at UNB…..Peter Leighton is playing his final season of eligibility with the Tigers. Leighton played his first four years at Acadia and played a pivotal role in the Axemen’s victory over Carleton at the 2008 CIS championships….the Tigers are leading the AUS in scoring defense, allowing a stingy 62 ppg. The Tigers are last in scoring offense with 72 ppg…..Another significant newcomer for the Tigers is Alex Arthur. The versatile swingman is averaging 7 ppg so far this season.

Record: 0-4, last place.
Head Coach: Ross Quackenbush
Players to Watch:
Joey Haywood– The nation’s leading scorer, averaging 28 ppg on 54 percent shooting from the field.
Tory Fassett– Newcomer is averaging 16 ppg and 7 rpg in the post.
Demittri Harris – Athletic guard is averaging 11 ppg so far this season.
Huskies Notes:
The last time the Huskies were on haligonia they lost a back and forth affair with the Acadia Axemen, 97-90 at the Tower. Joey Haywood scored 30 points on 12 of 18 shooting…..Huskies are coming off a sweep at the hands of the Cape Breton Capers 10 days ago in Sydney…..Harry Ezenibe has become a presence in the post for Saint Mary’s averaging 10 points and 6 rebounds a game……the Huskies are second in the conference in scoring offense with 89 ppg. They are last in defense allowing a whopping 97 ppg…..the Huskies lost to their chief rivals, the Saint FX X-Men earlier this month in Antigonish, 97-84……post player Simon Marr has struggled early on, averaging only 3 points and 4 rebounds a game….the Huskies will wrap up the first term with a weekend trip to Memorial to play two games vs. the Seahawks.
Tip time from the Tower is 8:00. Webcast on www.live.haligonia.ca will begin at 7:55 approx., join Mavs and Bill for all the action!
Email comments or question to sports@haligonia.ca. Follow us on twitter @haligoniasports.