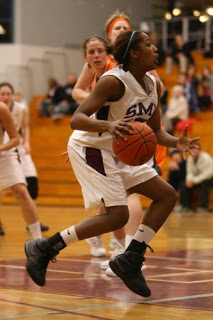 Justine Colley and the Saint Mary’s Huskies host the Dalhousie Tigers Tuesday night at the Tower. The rebuilding Tigers have been gutted by graduation the last couple of years while the Huskies have reloaded with the additions of Suzanne Canvin and Meaghan Seaward.
Anna Stammberger’s youthful Tigers are coming off a 68-38 drubbing at the hands of the Saint Francis Xavier X-Women in Antigonish, while the Huskies have been off for ten days after splitting two games on a weekend trip to Cape Breton.
Game time from the Tower is 6:00 and will be webcast on www.live.haligonia.ca. Mavs Gillis and Bill McLean will have the call.
Meet the Tigers
Record: 1-2, tied for 4th place with 4 points (victory vs. UPEI was a 4 point game)
Head Coach: Anna Stammberger (2nd Season)
Key Players:
#4 Anna Von Maltzahn – A key defensive player who averages 9 ppg (points per game).
#10 Brooke Sullivan– The versatile veteran averages nearly 11 ppg and 8 rpg (rebounds per game)
#7 Tia Geratowski – A post player who transferred from GPRC in Alberta, she’s averaged 10 ppg and 6 rpg but has struggled to stay out of foul trouble.
#5 Courtney Thompson– High energy rookie point guard leads the Tigers in scoring with 11 ppg.
Tigers Notes:
Stammberger’s Tigers have been devastated the last two years from graduation of former AUS all stars and long time starters. After 2009 the Tigers lost Kelly Donald, Kate Mcneil, and Jenna Kaye. This past year they said goodbye to Leah and Laurie Girdwood, April Scott, and Cailin Crosby. Alex Legge is still involved with the program as an Assistant Coach while she continues to rehab a knee injury……The Tigers got their first victory of the season on November 14th vs. the UPEI Panthers…..Dalhousie made only 9 field goals and committed 34 turnovers in their loss to St FX over the weekend…..former Auburn High School star Stephanie Hiltz transferred to Dalhousie from Saint FX and is coming off the bench for the Tigers…..Keisha Brown has transferred from Acadia to Dalhousie and will play for the Tigers next year. Brown is the younger sister of Alise, the former Saint Mary’s standout. Keisha averaged nearly 12 points per game in 2 seasons at Acadia.
Ladies and Gentleman…your Saint Mary’s Huskies!
Record: 2-2, tied for 4th place with 4 points.
Head Coach: Scott Munro (3rd season)
Key Players:
Justine Colley – The super sophomore is averaging 22 ppg, which includes a 43 point outburst vs. Acadia.
Susanne Canvin – The former UPEI Panther has not disappointed averaging 15 points and 13 rebounds a game.
Robbi Daley – Kelsey’s younger sister is coming into her own, averaging 13 ppg.
Meaghan Seaward – The former Memorial Seahawk has taken over down low for Laure Pitfield, averaging 9 points and 4 rebounds a game.
Huskies Notes:
The last time the Huskies were on haligonia.ca was the season opener vs. Acadia. Saint Mary’s defeated the Axewomen 92-86 in the 4th highest scoring women’s game in CIS history. The Huskies came back from a 51-38 halftime deficit……The Huskies are coming off a tough split with the Capers in CBU. SMU beat the Capers 78-73 in double overtime to get a win that not many teams achieve in Sydney…..the Huskies are lacking depth this season. The highest scoring player off the bench is Jorunn Matthiessen with 2.3 ppg…..dual sport athlete Haley Fox is back in uniform for the Huskies. The daughter of local legend Mickey Fox is playing for Scott Munro fresh off her outstanding season in the backfield for the Huskies soccer team…..so far this season the Huskies have been outscored by their AUS opponents (298-286) and have committed more turnovers (81-60)….the Huskies have outscored opponents 102-67 in the third quarter.
Tuesday’s tip time from the Tower is 6:00. The game will be webcast on http://www.live.haligonia.ca/!
Email comments or questions to sports@haligonia.ca. Follow us on twitter @haligoniasports