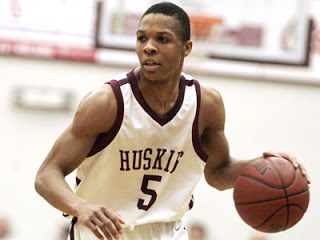 With Mark McLaughlin and Ike Ichegbu gone, Joey Haywood will be the focal point of the Huskies in 2010/11.

by Jared Hochman
The Saint Mary’s Huskies kick off the AUS 2010-11 men’s basketball season Thursday night when they host the Acadia Axemen at 8:00 p.m. Catch the live webcast with Mavs Gillis and Bill McLean on the call at http://www.live.haligonia.ca/.
Head coach Ross Quackenbush will look to build upon a moderately successful season last year, where the Huskies went 14-6, good for third in the Atlantic University Sport conference behind powerhouses Cape Breton and St. Francis Xavier.
By virtue of a controversial foul call by Joey Haywood on Christian Upshaw, they bowed out in the semi-finals of the AUS tournament last season, losing a nail-biter 79-78 to the X-Men.
Saint Mary’s will be missing a few key pieces as they try to topple their Nova Scotia rivals this season, as two of their three leading scorers from last year, All-Conference selection Mark McLaughlin and Ikeobi Uchegbu, are no longer with the squad.
The team also lost veterans Ryan deWinter and Mike Poole, but perhaps the most important piece of last year’s puzzle still remains in Joey Haywood, who was the leading scorer in the AUS at 23.5 points per game.
The fourth-year guard was also an All-Conference selection and a second team All-CIS selection.
He will joined by an array of imports, including three players from South of the Border to bolster the depleted front line.
New to the Huskies this year are their Maryland contingent, 6-foot-5 Torey Fassett and 6-foot-8 Korey Webb from Howard Community College in Baltimore, as well as 6-foot-5 freshman Antonio Myles. The team also added fourth-year transfer Jerome Smith, a guard who averaged just below 14 points per game last season with the OCAA’s Mohawk College.
No matter who is on the floor for the Huskies, perhaps the biggest improvement the team needs to make is to get to the free-throw line more often. They finished third in scoring and fourth in scoring defence, but they could not gain any advantage from the easy points.
They led the AUS by shooting 72 per cent as a team from the charity stripe, but only made 217 free throws last season, second-worst in the conference and sixth-worst in all of the CIS. Look for the Huskies to take advantage of their American imports in the frontcourt and have
Haywood drive more to the lane and draw fouls.
Saint Mary’s path to the CIS Final 8 begins with the Axemen, who finished last season in fifth place with a 9-11 record. Acadia made its living last season on the glass, finishing first in the conference in rebounding margin.
They’ll need to continue dominating the glass, as leading scorers from last year Casey Fox (transferred to Dalhousie), and Alexander Traikov is gone. The second team all-Conference centre Traikov was also the team’s leading rebounder, so the rest of the squad, including sophomore Owen Klassen and junior Justin Boutilier, will look to clean the glass.
Sophmore Anthony Sears will look to carry the scoring load, building upon his 13.7 average last year.
Saint Mary’s swept both games last season by a combined total of 10 points.
Tip time from the Tower is 8:00 on http://www.live.haligonia.ca/.
Jared Hochman is a graduate of the University of King’s College Journalism program who lives in Halifax. You can follow him on twitter @JaredLHochman.