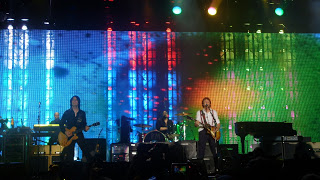 It’s been a few days, but I feel like I can’t move on to something else until I talk about it.
As mentioned previously, I landed some tickets to the Paul McCartney concert that happened on Saturday. I was unbelievably excited before going, and it only kept building when my brother and I arrived to find ourselves near the front of the line (people camped there?) and then within 30 feet of the stage once they finally let us in.
I was probably too optimistic at first, thinking we’d get a chance to sit down in between sets and I wasn’t alone. Some had brought blankets and spread them out for the opening act (Sierra Noble, I’d never heard of her either). One group felt that their blanket was sacred space and tried to defend it until the bitter end – but a crowd of 50 000 is hard to hold back when your only defence is some fleece and a flip flop.
I’m really glad we didn’t end up bringing chairs. They had a section near the back gated off for chair toters, and a lot of people just dumped them and went to the front. A chair would have been nice, since we had stood for 3 hours in line and then another 8 hours once we got to our spot.
11 hours standing? Yeah, that’s painful. It was cramped up there too with only inches between me and the next fan. I actually had bruising and swelling from an old injury… but whatevs, it was totally worth it!
My two main worries were not being close enough to see Sir Paul and having to go to the bathroom at an inopportune time. I could definitely see Paul and my plan to drink only enough water to not die worked perfectly! If I had left my spot there was no way I would have gotten back to it. Did you see that crowd?? 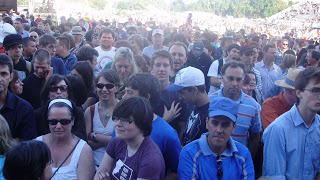 Wintersleep went on stage somewhere around 6 pm and they were great, as usual. I think maybe they were a little tired from flying in from Ottawa only hours before, but they still rocked it and seemed to enjoy themselves. Not in a million years did I think I would see some guys I went to high school with open for a Beatle. That’s insane!!
Next up was Joel Plaskett and he was at the top of his game! Full of energy and obviously thrilled to be doing what he was doing. He had what seemed like a short set, but it was really, really good. I can’t believe he’s not more famous cuz that dude’s got some mad skillz. Yo.
Then of course, the moment I didn’t know I had been waiting my whole life for. If you had told me when I was 13 years old that I would be seeing Paul McCartney live, in person, in my more or less home town I would never, ever have believed you. I didn’t cry or freak out like I thought I would (maybe it was the dehydration?) but I was completely mesmerized for the next 2 hours and 38 minutes. Dude played 36 songs! 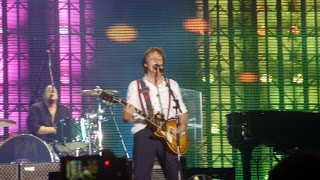 It is honestly one of the major highlights of my life, and I don’t care how cheesy that sounds. Someday they’ll hand me my first born and unless it breaks into a raucous version of “Drive My Car”, I’ll be a little disappointed.
Some highlights for me? Other than being super close for the whole she-bang – Live and Let Die was amazing (I could feel the heat from the stage!). I also wanted to hear Get Back, and Helter Skelter in the encore was a nice surprise too. Then naturally comes the communal experience of everyone singing Give Peace a Chance in unison with peace signs waving in the air. I didn’t realize it at the time, but this is the first time Daytripper had been played in concert by a Beatle since their last performance in 1966. And lastly, he performed Mull of Kintyre with a little help from the 78th Highlanders. It’s a boring song, but who could help feeling it with the Nova Scotia tartan displayed on the screen behind him and the bag pipes sailing across the stage.
So really, all the awesome things that everyone has already mentioned were awesome things to me too. I kept telling my brother that I couldn’t believe where I was and who I was seeing. Even now whenever I see the fuzzy over-exposed shot on my cell phone I giggle like a school girl. Going to that concert was one of the best things I’ve ever made myself do, bar none.
What’s next then? I’ve been wracking my brain trying to think of another concert I’d be just as excited to see, or something else I could do that would bring that much joy and satisfaction. While I’m sure there is something, at least for now the glowing memories of that show are blocking my imagination.
The videos I linked to are all really terrible. C’est la vie. If you wanted a good view, you totally should have gone 🙂