Well respected and much beloved romance and romantic suspense author Beverly Barton has passed away. Ms. Barton was only 64 and died from heart complications.

Beverly published her first novel Yankee Lover in 1990. She went on to pen more than 70 titles! She is perhaps best known for her Protector romance series. For an example, here is the publisher’s description of Gabriel Hawk’s Lady :

THE PERFECT GENTLEMAN? “Gabriel Hawk was every mother’s worst nightmare and every daughter’s secret fantasy. Unless that daughter was Rorie Dean! Unfortunately, the dark, brooding man with a heart of stone and a body that yelled sex was Rorie’s only chance of finding her nephew…. And Rorie would face any danger to rescue the boy. But days trekking through the jungle, dodging bullets and chasing a trail of lies were nothing compared to the look in Gabriel’s eyes or the passion she found in his arms. Was it just the moment — or was it love? The Protectors: Ready to lay their lives on the line, but unprepared for the power of love.“ 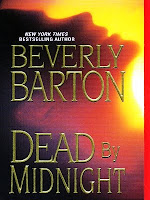 Beverly wrote her first romantic suspense novel in 1990, After Dark. Most recently she had created a new romantic suspense trilogy, the “Dead By...” series. The successful first title Dead by Midnight has already been released and books two and three, Dead by Morning and Dead by Nightfall, will be released posthumously later this year.

Beverly was adored by her fans and was a big supporter of the writing community. She was a founding member of the Heart of Dixie chapter of the Romance Writer’s of America.