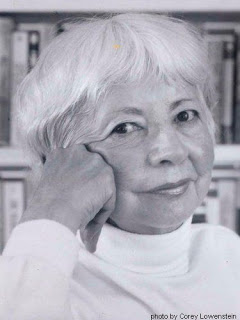 Dorothy Gilman (M), author of the Mrs Pollifax mystery series has passed away at the age of 88.
Mrs Pollifax was a grandmother who left her comfortable retirement to take up a later life career in espionage. Her first adventure was published in 1966:

The Unexpected Mrs Pollifax (M). “Mrs. Virgil (Emily) Pollifax of New Brunswick, New Jersey, was a widow with grown children. She was tired of attending her Garden Club meetings. She wanted to do something good for her country. So, naturally, she became a CIA agent. This time, the assignment sounds as tasty as a taco. A quick trip to Mexico City is on her agenda. Unfortunately, something goes wrong, and our dear Mrs. Pollifax finds herself embroiled in quite a hot Cold War–and her country’s enemies find themselves entangled with one unbelievably feisty lady.” Discover

Over the course of the next 30 years Mrs Pollifax uses her unassuming appearance to deliver documents to fellow spies in Turkey and Bulgaria. As her success grows she finds herself dispatched to Africa, China, Thailand and other exotic locales with the mission to rescue kidnapped agents and solve mysteries with her combination of keen observation, common sense and resourcefulness. In her final outing (Mrs Pollifax Unveiled (M)) “After facing down hijackers on a flight to the Middle East and saving the lives of the passengers on board, a young American woman steps off the plane in Damascus in a blaze of celebrity and disappears. The CIA believes Amanda Pym was kidnapped, possibly murdered. Masquerading as Amanda Pym’s worried aunt, Mrs. Pollifax begins her determined search, slipping through Damascus’s crooked streets and crowded souks . . . and trekking deep into the desert. Yet she is shadowed by deadly enemies, whose sinister agenda threatens not only Mrs. P. but the fragile stability of the entire Middle East. Only a miracle–or a brilliant counterplot– can forestall a disaster that will send shock waves around the world.” publisher

Dorothy Gilman has a Nova Scotia connection which she describes in A New Kind of Country (M). In the early 1970s, with her children in college, Gilman abandoned her New York life and found peace in a coastal village (which she leaves unnamed) in Nova Scotia. Here she found strength in rural living. “Novelist Dorothy Gilman, author of the bestselling Mrs. Pollifax series, had reached a point of no return in her life. With her sons in college, Ms. Gilman was searching for something unknowable, unnameable . . . until she bought a small house in a little lobstering village in Nova Scotia, Canada. And so she began her life again, discovering talents and interests she never realized were hers, accepting the inner peace she had always fought, and most of all, understanding the untapped part of herself, almost as if it were a new kind of country, to challenge, explore, and love.” Discover
In 2010 The Mystery Writers of America bestowed the honour of Grand Master on Dorothy Gilman recognizing her lifetime of achievement. Other illustrious recipients have included Agatha Christie (M), Elmore Leonard (M), and P.D. James (M).