Author and screenwriter Richard Matheson (M) has died at the age of 87. 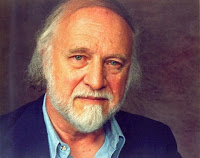 Richard Matheson was born in New Jersey to Norwegian parents and, according to an obituary had his first short stories published at the tender age of eight.

Matheson has a huge bibliography of novels and short stories and he was very active for six decades. His stories often featured solitary men under some duress, like his very famous I Am Legend (M).

“Robert Neville may well be the last living man on Earth . . . but he is not alone. An incurable plague has mutated every other man, woman, and child into bloodthirsty, nocturnal creatures who are determined to destroy him. By day, he is a hunter, stalking the infected monstrosities through the abandoned ruins of civilization. By night, he barricades himself in his home and prays for dawn…. “publisher

Matheson’s horror tales often explored how everyday benign things could be regarded as terrifying such as in The Incredible Shrinking Man (M). “Inch by inch, day by day, Scott Carey is getting smaller. Once an unremarkable husband and father, Scott finds himself shrinking with no end in sight. His wife and family turn into unreachable giants, the family cat becomes a predatory menace, and Scott must struggle to survive in a world that seems to be growing ever larger and more perilous–until he faces the ultimate limits of fear and existence.”

Writers such as Stephen King (M) and the late Ray Bradbury (M) admired Matheson’s writing and counted him as an influence.

Matheson also has many film and television credits to his name. He is most often associated with the Twilight Zone (M), but also, I just learned, wrote that really cool Star Trek (M) episode “The Enemy Within” in which a transporter malfunction leads to there being a good Kirk and an evil Kirk.

Richard Matheson will be remembered as having crafted compelling and suspenseful novels and short stories and will be long thought of as a leading voice in science fiction, fantasy and horror literature.