British mystery writer Robert Barnard (M) has passed away at the age of 76.

Barnard was known for cosy mysteries which were witty, puzzling and also served the purpose of being social satires.

According to his obituary in The Guardian, Barnard was proud to write in the tradition of Agatha Christie whose goal he believed was to entertain the reader. Robert Barnard was an academic and a novelist, lecturing and writing in Australia, Norway and Great Britain.

His novels spanned five decades with his most recent being A Charitable Body (M) published in 2012.

“Yorkshire cop Charlie Peace’s wife, Felicity, is thrilled when she’s asked to help oversee Walbrook Manor, a recent gift to the nation. It’s not long though, before both she and Charlie smell trouble. Walbrook has a lurid history of feuds and treachery that the family might better have kept to themselves. And when the wreck of a car and the remains of a woman turn up in a nearby lake, Charlie and Felicity are left to probe the sins of the past.” publisher

Detective Charlie Peace was introduced in 1989 with the novel Death and the Chaste Apprentice (out of print, try Interlibrary Loan).

In addition to this police procedural series and other stand-alone mysteries, Robert Barnard also wrote books of literary criticism and was considered to be a Bronte expert. In 2000 he published a biography of Emily Bronte (M) 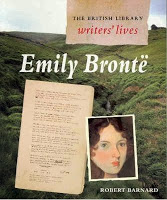 “Largely self-educated, Emily Bronte (1818-1848) was her father’s favorite daughter and spent most of her life at the rectory in Haworth, on the edge of the Yorkshire moors. She lead a protected, uneventful existence, with almost no social contacts. Robert Barnard examines her insulated childhood, peculiarities, social boorishness, and aversion to relationships. He includes excerpts of Emily’s lyrical poems of her twenties which presage the raw intensity of Wuthering Heights. Many aspects of her only novel are shaped by her own experiences, and the author traces the real-life counterparts of characters, landscape, and buildings. He draws extensively from critical sources varying from early reviews of Wuthering Heights to Gaskell’s appraisal of Emily’s “stern selfishness,” to Juliet Barker’s recent biography of the Bronte family.”