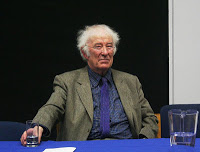 Irish poetry superstar Seamus Heaney (M) has passed away at the age of 74. A national treasure of the Irish Literary scene since the mid sixties, Heaney ranks right up there with William Butler Yeats as Ireland’s iconic poet.

He won the Nobel Prize for Literature in 1995, only the third Irishman to do so, after Yeats and Samuel Beckett. He was also the recipient of the Golden Wreath of Poetry, T. S. Eliot Prize and won the Whitbread Prize twice, in1996 and 1999. Most recently, he was awarded the Lifetime Recognition Award from the Griffin Trust For Excellence In Poetry in 2012.

His first poetry collection was Eleven Poems, published for the Queen’s University Festival in 1965. His first major volume was the 1967 critically acclaimed Death of a Naturalist. His most recent work is 2010’s Human Chain, shortlisted for the Griffin Prize.

“Heaney had brought “incredible joy” to readers. He was a “truly decent man who operated so well in the world”. – Colum McCann,

“As his publisher we could not have been prouder to publish his work over nearly 50 years. He was nothing short of an inspiration to the company, and his friendship over many years is a great loss.” – Faber and Faber Publishing

“His influence ran broader than the arts. We all remember how US president Bill Clinton chose Heaney’s great phrase about when ‘hope and history rhyme’ from Heaney’s play The Cure At Troy in his speech in Londonderry, and went on to use it for the title of his book detailing his vision of the US in the 21st Century,”  – Ulster Unionist leader Mike Nesbitt

“His poetry had a universality. He came from the village of Bellaghy in Derry and his message reached out to all humanity. He was particulary moving when he wrote about family and friends.” Brian Harten, Louth Local Authority Arts Officer

“Through the beauty and elegance of his writing, Seamus Heaney reminded us of the bonds which unite and our duty to uphold the dignity of all,” – Patrick Corrigan, Amnesty International