Sad news in the book world – bestselling thriller writer Vince Flynn (M) has passed away at the age of 47 after a lengthy illness.

Flynn counted amongst his many fans, two former and very different US presidents, George W. Bush and Bill Clinton. Flynn found his way to the bestseller list via a career in marketing and the air force. He struggled with dyslexia and became an inspiration to others coping with the same condition.

Flynn’s first novel was Term Limits (M) published in 1997, but it was in his second novel Transfer of Power (M) that we first meet Mitch Rapp (M). Mitch Rapp is an undercover CIA counter-terrorist agent who is aggressive in his tactics and frustrated by bureaucratic rules and procedures. Part of his motivation was his girlfriend’s death in the Lockerbie bombing – a year after her death he was recruited by the CIA. Flynn’s series moves back and forth in time and we get to see Rapp’s early years in 2000’s American Assassin (M).

“Two decades after the Cold War, CIA Operations Director Thomas Stansfield must prepare his people for the next conflict. The rise of Islamic terrorism is coming, and it needs to be met abroad before it reaches America’s shores. Stansfield directs his protégée, Irene Kennedy, and his old colleague, Stan Hurley, to form a new group of clandestine operatives—men who do not exist—who will work outside the normal chain of command. Kennedy finds the ideal candidate in the wake of the Pan Am Lockerbie bombing terrorist attack. . . .
Among the thousands of family and friends grieving the victims is Mitch Rapp, a gifted college athlete, who wants only one thing: retribution. Six months of intense training prepare him to bring the war to the enemy’s doorstep, and he does so with brutal efficiency, leaving a trail of bodies from Istanbul and across Europe, to Beirut. But there, the hunter becomes the hunted: the enemy has prepared a trap, and the American assassin will need every ounce of skill and cunning if he is to survive the warravaged city and its deadly terrorist faction.” publisher

Flynn’s many fans appreciate the realism in his stories. Memorial Day (M), published in 2004, is said to describe a raid much like the one that killed Osama Bin Laden.

“Rapp, back in the field after a long stint on desk duty for insubordination, unearths the bomb plot during a daring commando raid on an al-Qaeda stronghold in Afghanistan. A U.S. strike force manages to intercept and disarm the nuke moments after it arrives by freighter in Charleston, S.C. Everyone, including series stalwart President Robert Hayes, congratulates themselves on a job well done, but Rapp isn’t convinced; he believes al-Qaeda leader Mustafa al-Yamani has smuggled a second nuke into the country and plans to detonate it in Washington, D.C., during Memorial Day celebrations. Rapp, a ruthless terrorist pursuer by temperament and training, turns it up several notches this time around, following al-Yamani’s scent with feverish abandon.” publisher 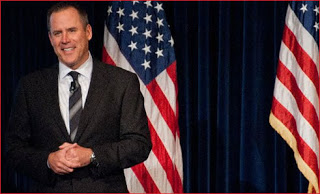 Unfortunately Flynn leaves an incomplete novel that is called Untitled (M) in our catalogue, but I have seen referred to elsewhere as Survivor. It is currently listed as “on order”.

Fans of fast-paced, complex tales of international intrigue will be saddened by this loss.