I’ve been to the Wooden Monkey a few times, but it’s just been for lunch or an early supper – I’ve never been for dinner.  A few weeks ago I met some friends for a late dinner where I was wowed by my meal.  Since we were going out later, I didn’t want to eat too big of a meal.

If I only knew what I was getting into!  Since ‘eating light’ was the name of the game, I decided to go with the Nova Scotian seafood chowder.  Of course, that plan was foiled when my friend suggested that we split some nachos as an appetizer.  Well, we were really hungry, so I quickly obliged.

Our nachos arrived and they were huge – not to mention delicious. And I hoped they would be, since at $17, they’re likely the most expensive in the city.  The organic blue corn chips were topped with a mix of jalapenos, black olives, red and green peppers, white cheddar, Mozzarella cheese and served with salsa and sour cream.  Unfortunately, we didn’t look at the price tag prior to ordering or else we may not have enjoyed them quite as much!  At this point though, they’re my favorite ones in the city. 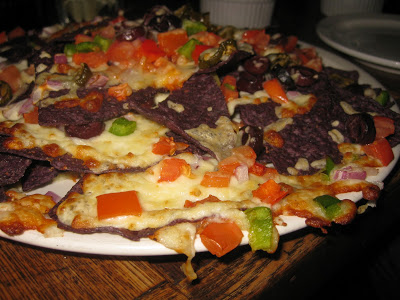 I can’t stop myself from eating these things; they’re delicious.  Gooey cheese, salty blue corn tortilla chips with an earthy note from the blue cheese and a fantastic (and likely organic) tomato salsa – we polished the plate in no time flat.  And then, my chowder arrived and I thought to myself, “how the hell am I gonna finish THIS.”  But… you know me, I found a way!  The chowder was tomato-based (my favourite kind) and was chock full of fish:  chowder with 5 oz. of haddock, scallops, lobster, mussels, and potatoes.  Served with wedges of spelt baguette, this could easily have been enough to fill me up. 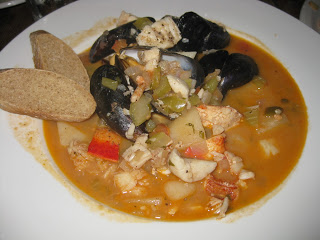 This was a great night filled with great food and good company.  I’m a pretty big fan of the Wooden Monkey for vegetarian fare or otherwise.  It often gets pegged as the vegetarian resto of choice in this town, but this spot has great stuff for meatatarians too!