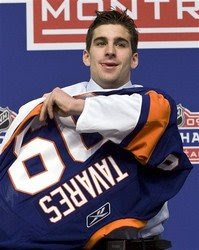 Isles Take Tavares; Pronger to the Flyers
As most expected, and every Islanders fan hoped, New York did select Jon Tavares with the #1 pick in this year’s NHL entry draft. We will never know if Garth Snow and crew were actually considering taking Swedish blueliner Victor Hedmon, or if it was all just media speculation, but Islanders faithful, 10,000 strong packed into Nassau Coliseum, were jubilant and delirious when Snow announced that the once proud franchise were selecting the all time leading scorer in the Ontario hockey League.
Hedmon was then plucked by the Tampa Bay Lightning with the second pick, followed by Matt Dechene by the Colorado Avalanche, who the media somehow convinced us the Islanders were considering picking as well (apparently Dechene grew up hardcore Colorado fan). Is it just a coincidence that TSN was covering the NHL draft and all 15 analysts they have were telling us that the Islanders first round selection was a three horse race? Sadly, no. However, it’s that much sadder that we believed them.

Are the Jays Coming Around?

Since starting the season at 27-14, the Toronto Blue Jays have gone 14-21 and have dropped from 1st place to 3rd. They’ve been showing some signs of getting back on track after a disastrous 9 game losing streak at the end of May, however a lot of the bats are still ice cold and the pitching staff is ravished with injuries. Cito Gaston has come under fire for mishandling his starting pitchers, and Vernon Wells had gone a month without hitting a home run, before knocking out a couple dingers this week.
So what’s happening? Well, the team would appear to be settling into the niche of mediocrity that this crop of Jays has been establishing for several years. This core of Jays, with the exception of Halladay, is painfully average. And in a division that consists of the Yankees, with the highest payroll in the majors, the Red Sox, with a core of players that have won a couple World Series, and the Tampa Bay Rays, who represented the American League in last year’s fall classic, mediocrity is going to get you nowhere. It’s only late June and the Jays’ hopes of ending their post season absence dating back to 1993, appears to be dissipating faster than a BJ Ryan
fastball (not very fast, but fast enough…to get beat).
Other Notes
The L.A. Clippers actually did something right for once and selected Blake Griffin with the #1 pick in the NBA Draft. Griffin is not the most ballyhooed #1 in recent times (see Lebron James), but is in the same class as Derrick Rose, last year’s top pick by the Bulls; a can’t miss prospect who will put butts in the seats and provide a solid base to build around…..the steal of the draft may have been Cleveland taking Danny Green of UNC. A late second round pick who won a title as a Tar Heel, has good size for a guard and a penchant for hitting clutch 3 point shots. Think the Cavs could have used him this year with all those missed jumpers coming off passes out of double teams on Lebron James?……….my San Fran Giants are leading the National League wildcard race! Only in the National League could a team with absolutely no offence be leading a playoff race halfway through the season. The Giants have 28th worst offence in the majors, surpassing only Seattle and San Diego. However, with Tim Lincecum and Matt Cain a combined 16-4 with era’s in the 2.30 range, followed by Randy Johnson and a steadily improving Barry Zito, the G-Men may have the best pitching staff in baseball…….Haligonia Sports is on a 3 week hiatus and will resume on July 10th. My guest for the Friday show will be Shaun Gillis, the voice of the Halifax Raimen, and John Campbell, the head coach of the AUS champion Dalhousie Tigers men’s basketball team.