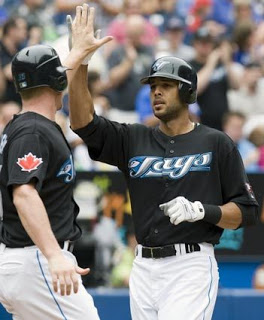 Haligonia Sports is back after a two week hiatus. This week’s episode on Friday will feature Steve Sarty, the Athletics Director at Saint Mary’s University. Please join us at noon!
Jays Gets Rid of Rios
What a strange and unpredictable fall from grace for Alex Rios over the past several seasons.
Once hailed as the future franchise player of the Toronto Blue Jays, Rios was picked up on Monday off the waiver wire by the Chicago White Sox.
An all star in 2007, Rios was looked upon as one of the up and coming stars in Major League Baseball. He was even selected to participate in the Home Run Derby that season.
Shortly after the all star game, Rios’ production began to drop off dramatically. It was rumoured that the Home Run Derby had a negative effect on his swing. Instead of just looking to drive the ball into the gaps, Rios was swinging for the fences and hitting pop flies instead.
Like his teammate Vernon Wells, Rios began to struggle mightily when hitting with runners in scoring position. His stock plummeted so dramatically over the remainder of 2007, that he became trade bait for JP Riccardi, who nearly used Rios to pull of the steal of the century.
Riccardi almost obtained Tim Lincecum straight up for Rios at the beginning of the 2008 season. The San Francisco Giants were desperate for a young, athletic player with lots of potential and had a stockpile of young arms. Before the deal was made, Giant’s GM Brian Sabean thought better of it and nixed the transaction.
Since then, Lincecum has won a Cy Young Award, was selected as the starting pitcher for the National League in this year’s all star game, and has led the Giant’s resurgence while becoming one of baseball’s most exciting pitchers.
Alex Rios has settled into a habit of mediocrity which didn’t seem like it was going to change in a Jay’s uniform. Like most of his Jays teammates, Rios has been painfully average this season and has fallen far below the expectations that came with the 7 year/70 million dollar contract he signed at the start of 2008.
Finally, the youtube video (http://www.youtube.com/watch?v=H2cxHRLJy6wf) of Rios exchanging profanities with a fan in Toronto that has circulated the past couple of months did not play favourably with Blue Jay’s faithful. A spattering of boos addressed to Rios had been common place at the Rogers Centre throughout the summer.
The Jays will receive nothing in exchange from the White Sox for Rios. However, they will have Rios’ outrageous salary completely wiped off the payroll, giving them some options come free agent season.
More importantly a message has been sent, albeit from a possibly lame duck GM. Mediocre play will no longer be accepted. Just showing up to the park and going through the motions is no longer an option. Now if Vernon Wells and Lyle Overbay are listening, the Jays might become a contender again.
Next year, that is.

Jays Get Rid of Rios
https://haligonia.ca/jays-get-rid-of-rios-4648/