[In case you missed out on the drama, my web server crashed on Wednesday evening, leaving this blogger on the verge of ugly crying over the loss of about 15 months of virtual ink. Although I backup my site regularly, I was bracing myself for the worst (what if the backup didn’t “take”, etc.?) and was already thinking about a blog post entitled “One is the loneliest number.” But we’re back in business. Thanks to everyone who talked me down from the ledge. Now give it up for my next wonderful guest.] 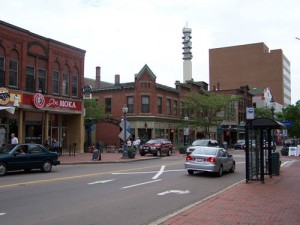 It’s been almost one year since my fiancé and I made the Big Move; packed up our two-bedroom condo in mid-town Toronto & pointed the car East. She knew the way; Snowball (my white VW Golf) only moved to the Big Smoke in January 2008. I think she was just as happy to move home as we were.

I grew up in Cape Breton, and there are many folks who’ll tell you they’re shocked I ever left. But I’m glad I did. I took the leap in baby steps: first to Halifax for university, then a brief re-charging on the Cape before hitting up Calgary for a year. Then it was back and forth between Moncton and Sydney before that journey to Toronto. I always missed home (and still do, seeing as I only made it back as far as Moncton), but I wouldn’t trade those experiences for anything. I’ve seen the alternatives and I decided to live here; I didn’t get here by chance, but by choice.

Hubby-to-be will tell you we moved back because he wanted a big garage. But it’s definitely about much more than that. The over-riding word that comes to mind for me is always community. There are great people and neighbourhoods anywhere you go, but there is something just a little more welcoming about the ones on the East Coast. I don’t necessarily mean the physical ones, either. In fact, we’ve never really socialized with our immediate neighbours here in Moncton. We live on a short road, out in the country. We’re the youngest home owners by at least 20 years, I’d guess — and we’re not young! But from the day we started the paperwork to buy our home — while we were still living in Toronto — we’ve felt connected and welcomed in this place. In addition to the excitement of our family and friends who we were returning to, there was the online community. Twitter. Moncton has easily more than 300 fairly active Twitterers. We bought a snowblower, set up our phones and internet, and sourced barber shops long before we were even in the province. Since we’ve been here, we’ve formed friendships — and even found the minister who is going to marry us! — through Twitter. As I’ve been planning our wedding, the community has been absolutely fabulous for sharing information & ideas anytime I’ve run into a glitch — and there have been a few!

I’m fascinated by the way the legendary Maritime hospitality and friendliness plays out equally online as it does in person – in some ways, I think even more so. For the most part, people who embrace technology like Twitter are already the type to share their lives openly, and to welcome you sharing yours. That’s led us to some wonderful new friendships, solidifying for us that we made the right decision when we packed up our comfy Big City life & set up house where you turn off the paved road.

Jenna MacNeil is a Cape Breton-born, journalism-trained 30-something living in Boundary Creek, New Brunswick. These days, her fiancé says she’s a spy — CIA, to be exact (competitive intelligence analyst for ShiftCentral in Moncton).