There are no shortage of books being published this fall looking at the history of the JFK assassination, which happened 50 years ago this November.  We have a number of interesting sounding titles on order.

Place your hold now and avoid the rush.

In the months and weeks before the fateful November 22nd, 1963, Dallas was brewing with political passions, a city crammed with larger-than-life characters dead-set against the Kennedy presidency. These included rabid warriors like defrocked military general Edwin A. Walker; the world’s richest oil baron, H. L. Hunt; the leader of the largest Baptist congregation in the world, W.A. Criswell; and the media mogul Ted Dealey, who raucously confronted JFK and whose family name adorns the plaza where the president was murdered. On the same stage was a compelling cast of marauding gangsters, swashbuckling politicos, unsung civil rights heroes, and a stylish millionaire anxious to save his doomed city.

Bill Minutaglio and Steven L. Davis ingeniously explore the swirling forces that led many people to warn President Kennedy to avoid Dallas on his fateful trip to Texas. Breathtakingly paced, DALLAS 1963 presents a clear, cinematic, and revelatory look at the shocking tragedy that transformed America. Countless authors have attempted to explain the assassination, but no one has ever bothered to explain Dallas-until now.

Hidden History of the JFK assassination (M)
by Lamar Waldron

November 22, 2013 marks the 50th anniversary of the tragedy that has haunted America ever since. For the first time, this concise and compelling book pierces the veil of secrecy to fully document the small, tightly-held conspiracy that killed President John F. Kennedy. It explains why he was murdered, and how it was done in a way that forced many records to remain secret for almost fifty years. ‘The Hidden History of JFK’s Assassination’ draws on exclusive interviews with more than two dozen associates of John and Robert Kennedy, in addition to former FBI, Secret Service, military intelligence, and Congressional personnel, who provided critical first-hand information. The book also uses government files—including the detailed FBI confession of notorious Mafia godfather Carlos Marcello—to simply and clearly reveal exactly who killed JFK.

CIA Rogues and the Killing of the Kennedys: how and why US agents conspired to assassinate JFK and RFK (M)
by Patrick Nolan

“The US Central Intelligence Agency is no stranger to conspiracy and allegations of corruption. Across the globe, violent coups have been orchestrated, high-profile targets kidnapped, and world leaders dispatched at the hands of CIA agents. During the 1960s, on domestic soil, the methods used to protect their interests and themselves at the expense of the American people were no less ruthless. In CIA Rogues and the Killing of the Kennedys, Patrick Nolan fearlessly investigates the CIA’s involvement in the assassinations of President John F. Kennedy and Senator Robert F. Kennedy—why the brothers needed to die and how rogue intelligence agents orchestrated history’s most infamous conspiracy.”

They Killed Our President: 63 reasons to believe there was a conspiracy to assassinate JFK (M)
by Jesse Ventura

“For the first time ever, New York Times bestselling authors Jesse Ventura and Dick Russell have teamed up with some of the most respected and influential assassination researchers to put together the ultimate compendium that covers every angle—from the plot to the murder—of JFK. They Killed Our President will not only discuss the most famous of theories, but will also bring to light new and recently discovered information, which together shows that the United States government not only was behind this egregious plot, but took every step to make sure that the truth would not come out.”

Some of the book’s revelations will be dramatized in the upcoming Warner Brothers film ‘Legacy of Secrecy’, produced by and starring Leonardo DiCaprio, which also stars Robert De Niro as Carlos Marcello.

Hit List: an in-depth investigation into the mysterious deaths of witnesses to the JFK assassination (M)
by Richard Belzer and David Wayne

Richard Belzer and David Wayne are back to set the record straight after Dead Wrong; this time they’re going to uncover the truth about the many witness deaths tied to the JFK assassination. For decades, government pundits have dismissed these “coincidental” deaths, even regarding them as “myths” as “urban legends.” Like most people, Richard and David were initially unsure about what to make of these ‘coincidences’. After all, events don’t “consult the odds” prior to happening; they simply happen. Then someone comes along later and figures out what the odds of it happening were. Some of the deaths seemed purely coincidental; heart attacks, hunting accidents. Others clearly seemed noteworthy; witnesses who did seem to know something and did seem to die mysteriously.

Hit List is a fair examination of the evidence of each case, leading to (necessarily) different conclusions. The findings were absolutely staggering; as some cases were clearly linked to a “clean-up operation” after the murder of President Kennedy, while others were the result of ‘other forces’. The impeccable research and writing of Richard Belzer and David Wayne show that if the government is trying to hide anything, they’re the duo who will uncover it. 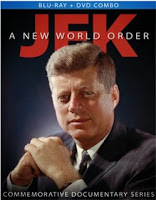 DVD ” Over 6 1/2 hours of the myth and memory of JFK! Fifty years after his death, John F. Kennedy’s life, legacy and youthful vigor continues to intrigue and enthrall an entire nation! Relive the compelling story of the unforgettable leader and the inspired dynasty he left behind. Insightful and concise this 8-part documentary series covers JFK’s life, from barely surviving birth to the tragic events in Dallas on November 22, 1963.”