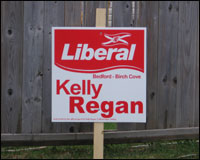 A professional journalist and director, political worker and community volunteer, Kelly Regan brings enthusiasm, eagerness to learn, and a passion for excellence to everything she does.

Originally from Kitchener, Ontario, Kelly has made Nova Scotia her home since 1984, when she began working at CFDR Radio in Dartmouth as city hall reporter. Her career progressed into a seven-year stint as a director of news programs for ATV/ASN, which saw her win two awards for health documentaries.

Building on her journalism experience, Kelly went on to work on a broad range of media and public relations projects, including the CBC documentary on the history of Halifax, Progress of Centuries, the successful children’s series, The Adventures of the Aftermath Crew, and a best-selling art book and national exhibition featuring Nova Scotia’s Maud Lewis.

A resident of Bedford since 1994, Kelly has been active in many community organizations, serving as a library volunteer at Sunnyside Schools, a member of the organizing committee of the annual Bedford volunteer awards, as executive member of Ridgevale Homeowners’ Association, and as an elder of Bedford United Church. She also serves as a judge for the Atlantic Journalism Awards.

In addition to her active participation as volunteer coordinator for the campaigns of Halifax West MP Geoff Regan, Kelly has contributed her organizational and communications skills to the Liberal Party at both the federal and provincial levels.

In 2003-04, she worked with former MLA Don Downe to examine and make recommendations on election readiness for the provincial Liberal Party. Most recently, she was asked by Michael Ignatieff to serve on the Special Committee on Party Renewal.

She is a founding member of the Nova Scotia chapter of Equal Voice, a multi-partisan group dedicated to increasing the number of women elected in Canada.

Kelly has a Bachelor of Arts (Honours) in English and Legal Studies from the University of Waterloo.

She has been married to Geoff Regan since 1993, and is the mother of three children, Caitlin, Nicole, and Harrison.

For more information on Regan visit her personal website at: www.kellyregan.ca.

For more information on the Liberal Party of Nova Scotia visit: www.www.liberal.ns.ca.