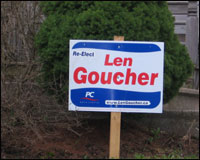 First elected to Bedford Council in 1988, Len has staunchly represented his constituents over the past two decades.

With amalgamation and the creation of the Halifax Regional Municipality Len was elected in 2000 as Regional Councillor representing the previous town of Bedford, now District 21. He was acclaimed in 2004 and was appointed HRM Deputy Mayor 2004/2005.

In the June 2006 provincial election Len successfully ran in the Bedford riding.

Premier MacDonald appointed Len to Cabinet as Minister of Tourism, Culture and Heritage and in October 2007 was sworn in as Minister of Immigration and Minister responsible for the Liquor Control Act and NSLC.

In January 2009 Len was given additional responsibility as Minister of The Public Service Commission and Minister of Seniors.

Len and his wife Lucie have two daughters Kim and Christina, and their grandson Noah.

For more information on Goucher visit his personal website at: www.lengoucher.ca.

For more information on the PC Party of Nova Scotia visit: www.pcparty.ns.ca.