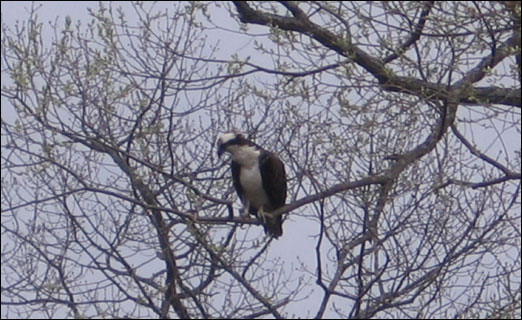 An osprey perches on a tree by the Sackville River.

It’s an annual occurence. Every year around Mother’s Day, an osprey lands on one of the trees by Fish Hatchery Park and calls Bedford home for a few weeks.

Perched on one of the large trees, this bird of prey can be distinguished by its black back and wings. A white line runs above the wings. Its yellow eyes are surrounded by a black band. The head is mostly white, with some black stripes.

These birds are seen mostly along the Atlantic coastline. They eat a variety of small fish. For this reason the osprey chooses the perch on a tree on the shore of the Sackville River. They dive feet-first and grab their prey with their talons.

The osprey builds its nest in high trees or poles, 60 feet above the ground, and the females generally lay two to three eggs. The same nest is often used each year, unless it is destroyed, either by the wind blowing it down or by human destruction.

The eggs start to hatch in June, and fledging can start as early as  the end of July.

The osprey was officially named the Nova Scotia provincial bird in 1994.

The osprey is back in Bedford
https://haligonia.ca/the-osprey-is-back-in-bedford-1682/