Last Friday, I was a guest at the KWV Wine Dinner at Gio restaurant in the Prince George Hotel. I’ve always been a big fan of Gio, but ever since I started the CAPS course (Canadian Association of Professional Sommeliers), food has almost taken a backseat to wine…Almost. I was looking forward to trying a variety of South African wines from the KWV portfolio all at once and was fortunate to be surrounded by the brand’s representatives, who spoke extensively about each wine’s character, as well as the wine and food pairings that we were about to enjoy.

As guests arrived, we were greeted with a glass of KVW Sparkling Cuvee Brut; a sparkling wine made from the Chenin Blanc grape. This wine’s crisp and fruity character was just right to set the tone for the evening’s celebration of South Africa’s wines.
The Menu
as prepared by Chef Vince Scigliano 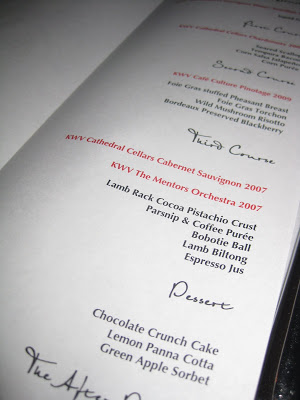 The first course was such a treat; an amuse bouche of the tenderest squid I’ve ever had – really. I suppose that my palate has been tainted by the deep fried rubber bands that some restaurants serve as calamari, but these squid rings were on another plane altogether. With a lightly dressed green salad to cradle the seafood, the flavours were slightly sweet and a lovely compliment to the wine; KWV The Mentors 2009 Sauvingnon Blanc/Semillion, whose green notes hinted of lime, green pepper and a slight chili piquancy.
Amuse Bouche
Squid Salad
paired w/ KWV The Mentors Sauvingnon Blanc/ Semillion 2009 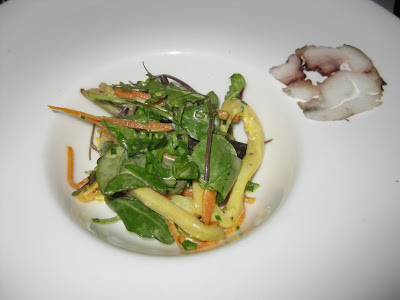 The first course consisted of a plump, tender scallop, served on a mound of spicy corn salsa, a smear of sweet corn puree and crowned with a lardon of crisp tempura bacon. The flavour profile aside, this was an engaging plate due to the full spectrum of textures; the juxtaposition of crunchy corn salsa, crispy bacon tempura and velvety corn puree created a palate of taste sensations upon which the scallop rested.

This course was paired with KWV’s Cathedral Cellars 2008 Chardonnay, a wine whose round, buttery-soft mouth-feel complemented the scallop’s lush texture, while its light citrus notes were a great match to the creamy corn puree and lightly spiced salsa. 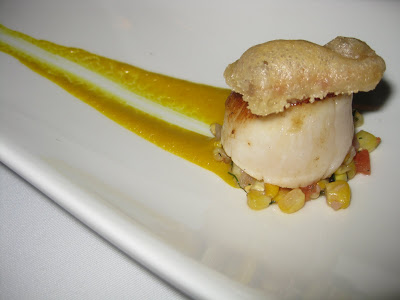 The second course saw my first encounter with pheasant. Now, I can’t be sure whether it was the fois gras talking, but I enjoyed its meat infinitely better than I do generic poultry. With a richer flavour and certainly more moisture, the pheasant was stuffed with a savoury fois gras mixture and served on a bed of (insert sigh here) wild mushroom risotto. The bright blackberry-Bordeaux sauce added a perfect amount of tang to the plate while cutting though the risotto’s richness.
The pairing here was KWV’s Cafe Culture Pinotage 2009. Though the novice wine student in me was a little skeptical, I soon learned that pinotage is a common pairing with game birds. The wine’s ripe, juicy flavour successfully matched the moist pheasant, while its notes of coffee and chocolate also seemed to compliment both the savoury stuffing and earthy risotto.
Second Course
Fois Gras stuffed Pheasant Breast / Fois Gras Torchon
Wild Mushroom Risotto / Bordeaux Preserved Blackberry
paired w/ KWV Cafe Culture Pinotage 2009 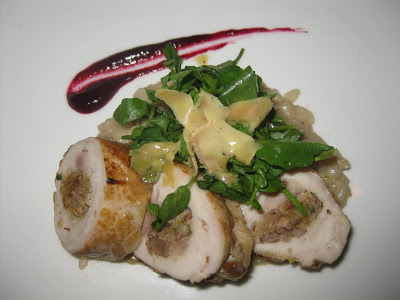 The main course was one that I had been particularly looking forward to. Normally, this would have been due to the combo of so many lovely things; lamb chops, cocoa, pistachio, coffee, parsnip (I’m a sucker for parsnip), but no, in this case, it was the two beautiful reds cascading into the glasses before me.

Yes, this course was slightly indulgent! With the duo of wines, diners were given the opportunity to select which one to pair with each component of the meal. Those served were the KWV Cathedral Cellars Cabernet Sauvingnon 2007; a slightly smokey wine with a hint of berry flavours and the KWV The Mentors Orchestra, 2007. A more elegant wine – and my favourite of the two – The Mentors is a blend of 5 wines whose complex character hinted of red berries, cigar, and spice.
The entree was an even balance of sweet and slightly bitter notes, with the pistachio-crusted lamb’s touch of sweetness being further enhanced by the parsnip puree. The “bitter” notes were quite pleasant in fact, represented in the form of both coffee and espresso within the sauces. On the side, Chef Scigliano added a little present in the form of a sweet and savoury lamb mixture within a light crust.
Third Course
Lamb Rack Cocoa Pistachio Crust /Parsnip & Coffee Puree
Bobotie Ball /Lamb Bilton /Espresso Jus
Paired w/ KWV Cathedral Cellars Cabernet Sauvingnon 2007
&
KWV The Mentors Orchestra 2007 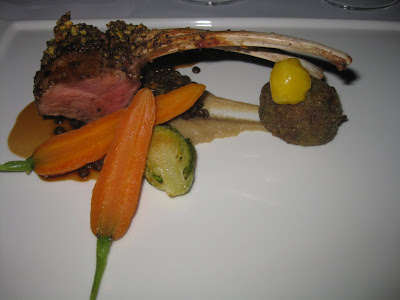 For dessert, we were served an enticing trio of both flavours and textures. A decadent bite of flaky, phyllo-enrobed chocolate disappeared immediately, swiftly followed by a shiver-inducing green apple sorbet. One bite of the luscious lemon panna cotta’s tangy smoothness was the last morsel I could handle.
Dessert
Chocolate Crunch Cake / Lemon Panna Cotta / Green Apple Sorbet 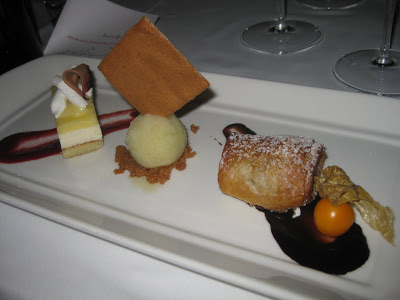 The After Dinner:
KWV Platinum 20 year old Brandy
I didn’t partake in the after dinner brandy myself, but chose instead, another glass of The Mentors Sauvingnon Blanc/Semillion. This white, and The Mentors Orchestra were my personal discoveries of the night, though the Cathedral Cellars Chardonnay won’t soon be forgotten. Having tasted only a couple of the more accessible KWV wines, I was thrilled to expose my nose and palate to such a charming array. The Cafe Culture Pinotage and Cathedral Cellars Cabernet Sauvingnon are currently available at the NSLC….Fingers crossed the others wines of the evening, aren’t far behind.