[I’ve got a special guest on the blog today. Please welcome the author of More Money Than Brains:Why Schools Suck, College is Crap, and Idiots Think They’re Right. Great title, isn’t it? If you’re interested in winning a copy, CBC Books is running a contest on Twitter all week. All you have to do is tweet a 140-character (or less) book review using the hashtag #cbc140.] 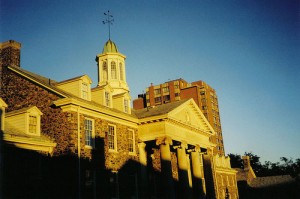 I am East Coast by birth and by choice. I grew up in Sydney, moved to Halifax for my BA at King’s and then returned after grad school in London, Ontari-ari-ari-o and Buffalo, New York. One of the reasons why I returned to Halifax is that it has beaucoup de universities. Moreover, the majority of them are sensibly located in the downtown core, where they help keep the embattled ecosystem of the city centre alive-ish.

Western, and my SUNY campus, were much further from what remained of their respective downtowns, and this is one of the factors that aided and abetted their decline. Buffalo was a particularly sad husk of its former self, its downtown so doornail-dead you could almost see tumbleweeds in front of the ex-banks and zombie storefronts.

Halifax’s downtown is, admittedly, not in great shape, but it would be far, far worse without the kids, the drunk kids, the donair-scarfing kids, redistributing their parentbucks, student loan cheddar and part-time wages. The universities are an important part of the local economy, but they also help keep the city walkable, livable and relatively civilized, for all the South Enders might bitch about the noise and occasional puke splotches on their pricey lawns.

The province has never treated the universities like they oughta. Instead of looking at them as an asset, as one of the few consistently successful industries in the province, we seem to regard them as a cash suck, a way to transfer tax dollars from hardworking everyday Nova Scotians to uppity professors who wouldn’t know a day’s work if it bit them on the arse.

This attitude—which what More Money Than Brains is about, btw—is only exacerbated by hard times. The province is waaay broke. The province is oldifying at an alarming rate. An NDP government has less leeway to be spendy than any other party, as the populace is quick to cry kommie-nist and invoke the dread spectre of Bob Rae.

The NDP will, as many of you know, release the results of Dr. Tim O’ Neill’s inquiry into the state of our universities this June. And I am sore afeared, suspecting cuts at least and amalgamation, an idea too dumb to die, at worst.

Our universities do have one real, structural problem. And as soon as flesh people once again rule our fair land, the provincial government needs to rectify it. It is a tax problem. We don’t have too many universities. We have too few taxpayers. We don’t ding the droves of Torontonian or Left-Coast students for being interprovincial in the same way that we overcharge international students…and I don’t think we should.

So my belated, delusionally optimistic advice to Tim O’ Neill is this: INVEST. Hose yer precious nerd gardens with cash. Turning this sleepy city by the sea into one of North America’s premier post-secondary destinations—totally doable for less than all the breaks for fly-by-night call centres—is an investment that will pay off for decades to come, with bonuses that go beyond the purely economic.

Just think, maybe someday some environmental studies geek at Dal’s new College of Sustainability will come up with an effective way to clean up all that impending ugly in the tar sands. And then we can charge those Albertan bastards an arm and a leg for it! What could be more spitefully delicious for Bluenosers young and old, for the greens and the merely green-with-envy?

Education is always the poor, red-headed stepchild of the budget, forever less than health care, the absolute priority for the olds that vote. And the fact that Nova Scotia governments routinely schedule elections as soon as those pesky come-from-away kids skedaddle for the summer says much more than my crabby, over-educated ass can about how much the government really values education and those who choose to pursue it here.

Author of the Canadian bestseller Your Call Is Important to Us: The Truth About Bullshit (a Globe and Mail Best Book of the year), Laura Penny has a PhD in Comparative Literature, a MA in Theory and Criticism and a BA in Contemporary Studies and English. She has worked as a bookstore clerk, a student activist, a union organizer, a university instructor and her writing has appeared in the Globe and Mail, the National Post, Saturday Night, and Toronto Life. She lives in Halifax where she teaches at Mount Saint Vincent University.