In honour of Remembrance Day and for the multitude of sacrifices made by our soldiers, I offer up the following reading suggestions. These novels all deal with the sacrifices and losses often experienced by soldiers. Lest we forget.
The Famished Lover
by Alan Cumyn

In this much anticipated follow-up to The Sojourn, Cumyn continues the story of Ramsay Crome, an artist who never quite came home from the First World War. The horrors of his years in a German prisoner of war camp continue to haunt him, as does the idealized memory of his long-lost sweetheart, his beautiful Margaret. Upon his return home to Montreal, he meets Lillian, a farm girl from the Eastern Townships and is drawn to her youthful vigour, her innocence, and yes, her beauty. These prove to be a potent elixir and they marry quickly. By the time she is pregnant with their son, she wants nothing more than to escape the dreary poverty of their Depression-era existence and flee back to the farm with her husband and child. She wants him to love only her, to open up about his war experiences, explain the paintings she found of a nude Margaret.” – Publisher
Hero
by Paul Butler
“ 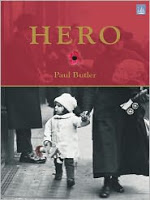 On the morning of July 1, 1916, Lieutenant Simon Jenson, shellshocked and demoralized after a year and a half in the trenches, makes a life-altering mistake. But with his actions misinterpreted, he is celebrated as a hero. When Simon returns from the war, his wife, Sarah, and daughter, Lucy, find him emotional fragile and prone to violent rages. Caught up in her own grief and loss, Elsa, the Jensons‘ governess from St. John’s, is thrust into the middle of the family’s turmoil. Only when one of Simon’s fellow soldiers turns up and casts the shadow of blackmail over them all does unexpected change force its way into their lives.” – Publisher
Where White Horses Gallop: a novel
by Beatrice MacNeil

“Beinn Barra, in the northern highlands of Cape Breton, is as rugged as it is beautiful, as daring as it is pristine, as susceptible to war as it is to peace. It is 1939, and England has declared war on Germany. Canada will march beside her. And the lives of five young friends will be changed forever. This novel is a haunting tale of friendship and of a traumatic war where emotional bullets riddle the spirit long after the guns in the Arielli Valley and the Delfziji trenches have grown silent.”” – Publisher