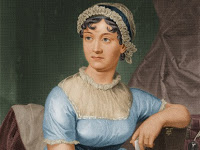 Jane Austen has become the epitome of eighteenth century domestic fiction. Jane came into her own in the twentieth century first with interest in academic circles and then later the rest of us. She lived her short life, except for a time in boarding school, cloistered within the world of her family and neighbors. Neither she nor her sister married, and although her family was supportive of her writing, her father’s death left Austen, her mother, and her sister dependent on her brothers. This economic dependency and the absolute necessity of living within society’s rules were frequent themes in her novels.

The eighteenth century lives on in our continued interest in Jane Austen. Janeites, or lovers of all things Jane, not only study her works but hold balls and tea parties a la Jane. They have been compared to Trekkies in their devotion. If we can call Jane Austen a genre, we have also blended the Jane genre with current interests, vampires, zombies, whatever. Jane transcends time.

What else was going on? Austen novels were focused on the upper middle class and their concern with advantageous marriages. Around them was the French Revolution, the American Revolution, the Napoleonic War and the Industrial Revolution. The Industrial Revolution sent displaced rural workers to the city swelling the ranks of the urban poor. Victorian morality was yet to come and aristocratic excess was the norm in the time of George III and the Regency. Regardless of class the rules for women remained the same. Marriage was an economic necessity and there was no redemption for a fallen woman.

The Lady in Red: an Eighteenth-Century tale of sex, scandal, and divorce by Hallie Rubenhold tells the story of Lady Seymour Worsley and her husband Sir Richard Worsley. They became embroiled in a nasty divorce proceeding. Seymour Dorothy Flemming found herself heiress to a vast fortune (in the 10’s of millions by our standards) and was thus an appealing choice for Worsley. The marriage rapidly came to a bad end with Lady Seymour absconding with her lover. The aggrieved Worsley (now in possession of her fortune) took her lover to court. Lady Seymour unexpectedly produced a string of lovers who testified that Worsley not only condoned her affairs, but encouraged them. His case was thrown out of court and Lady Seymour was caste out of respectable society.

On the other end of the economic scale is England’s Mistress: the infamous life of Emma Hamilton by Kate Williams. Emma Hamilton began her life in poverty eventually becoming a prostitute. Intelligent and ambitious she eventually does the seemingly impossible and marries Sir William Hamilton, the aging ambassador to Naples. She and Hamilton make her into a star, if not into an acceptable society lady. She went on to entrance Horatio Nelson and had his baby. During her lifetime, she became one of the most famous (infamous?) women in Britain. Her life may have been glamorous, but it was also precarious, with Emma and her daughter Horatia in debtors prison.

Fortunate to be born to money and to position, Georgiana, Duchess of Devonshire ( Georgiana, Duchess of Devonshire by Amanda Foreman) was a society hostess who held the fashionable world in the palm of her hand. She led the way in fashion and she was sought out for her opinions and influence. She was incredibly influential in the literary and political worlds. Of course, there was a darker side as well. Georgina indulged in alcohol, love affairs and gambling. At the time of her death, she was reported to be deeply in debt. The Duchess’ life was excessive, but she was protected by wealth, family and she played within the rules of her class. Interestingly she is an ancestor of both Princess Diana and Sarah, Duchess of York.

With no protection and ultimately no hope was Clarissa (Clarissa, or, The History of Of a Young Lady by Samuel Richardson, written in 1748). The fictional Clarissa was the ultimate victim. Also known as one of the longest novels in the English language, Clarissa is the story of a young woman who desperately tries to maintain her virtue. She is just a pawn in her family’s quest for position. Clarissa is repelled by the marriage that is being forced upon her, she mistakenly puts her trust in Richard Lovelace who takes her virtue. There can be no redemption for the fallen woman, and Clarissa sickens and dies. It is not until after her death that those who treated her so badly were called to task.

Life and Love in the Eighteenth Century - The Lady in Red by Hallie Rubenhold
https://haligonia.ca/life-and-love-in-the-eighteenth-century-the-lady-in-red-by-hallie-rubenhold-12430/