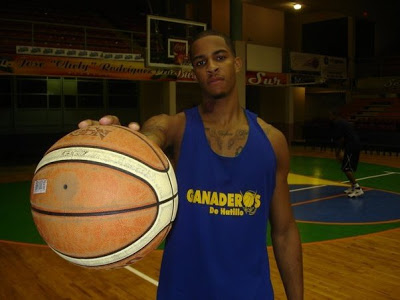 The 9-2 Halifax Rainmen has one of its toughest matchups this Friday when they face off against the hottest team in the league, the Puerto Rico Capitanes.  With an 11-1 record, the Capitanes have rolled over opponents in the first half of the season.   They had a strong start, going on a 9-game win streak and then suffered their first loss of the season against the Rochester Razorsharks back on February 15th.  Two of the top five scorers in the PBL are on this Captianes roster, Elias Ayuso (22.4 ppg) and Angelo Reyes (20.6 ppg and a league-leading 16.8 rpg).  Fortunately for the Rainmen, Reyes will not be in Halifax for this upcoming matchup.

Also on this roster is the PBL’s 2009 #1 Draft Pick, Haakim Johnson.  Johnson was selected by the Puerto Rico Capitanes back in October, and has averaged 4.7 ppg and 2.7 rpg in his PBL rookie season.  Coming out of Passaic, New Jersey, he played college ball with the Pikeville Bears before playing in Puerto Rico.  I got the chance to chat with Haakim and asked him about about Puerto Rico’s success, Friday’s Capitanes-Rainmen matchup and what his rookie experience has been like so far.
__________

Romy (Haligonia.ca):  The Puerto Rico Capitanes are having a remarkable season with an 11-1 record, how has Puerto Rico achieved this success?

Haakim Johnson:  I believe the 11-1 record came from us playing good team ball, everyone on the team plays their role well and that alone brings us success.

Romy (Haligonia.ca):  How important is this upcoming matchup with the Halifax Rainmen?

Haakim Johnson:  This matchup is just important to us as any other team, we will continue to do what works for us and that is play our game.

Romy (Haligonia.ca):  You were the #1 pick in the 2009 PBL Draft, how has your rookie season been playing in sunny Puerto Rico?

Haakim Johnson:  It was definitely a great feeling being the #1 overall pick and even better that I came to a team with guys like Larry Ayuso, Andres Rodriguez and Jeffrion Aubry who are experienced veterans. They all have been helping to guide my game to make me a better player. I even got to spend some time with Bonzi Wells who also would help me work on my game, so just that alone made my time in P.R. very beneficial.

Romy (Haligonia.ca): What is your role on this team?

Haakim Johnson:  My role on this team I would say is to come off the bench and help out the guards as well as the big man and give positive productive minutes for the time that I’m in.  Also, to work hard in practice so that I get better and also drive everyone else around me to better themselves.

Romy (Haligonia.ca):  What will the Capitanes need to focus on as the team pushes closer to the playoffs?

Haakim Johnson:  Like I said before, we have been playing great team ball so we will have to continue that and I believe if we just play our games, we will have a successful rest of the season.

Romy (Haligonia.ca):  This will be the first time Halifax fans will get to see the Puerto Rico Capitanes live in action, who are some of the standouts on this team?

Haakim Johnson:  We have a roster full of good players but Larry Ayuso, Jeffrion Aubrey and David Cortes are just a few of the players that have been playing very well for us. These are guys with a lot of experience who know what it takes to win..

Romy (Haligonia.ca):  I’ve watched some of the Puerto Rico games online, the Capitanes’ commentators may be the most enthusiastic and exciting guys in the league. What’s the best Spanish expression in terms of basketball, is it “En Fuego!”?

Haakim Johnson:  Yes, they are very into the game and they have a great history of basketball in Puerto Rico.  And yeah, I would say “EN FUEGO” is one of the more popular expressions.
__________

Haakim and his Puerto Rico Capitanes face off against the Halifax Rainmen in what may be the biggest game of the season this Friday night (Game time at 7:00pm), watch it live here on Haligonia.ca!

A huge thanks goes out to Haakim for taking part in our game preview, be sure to check out more about the Puerto Rico Capitanes at their official website.