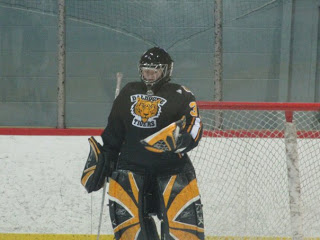 Jocelyn Leblanc, Emelie Edefors Lead the Way for Struggling Tigers
2010 has not been kind to the Dalhousie Tigers Women’s hockey team. Heading into Sunday’s game with the perennial powerhouse Saint Francis Xavier X-Women, the Tigers were looking to take a big step back in the right direction as the AUS playoff tournament approaches.
Mission accomplished.
The Tigers beat St. FX 3-2 on a goal by Robin Mullin at the 8:42 mark of overtime to record only their third victory since late November. The Tigers split the season series with the X-Women.
Jocelyn Leblanc led the way for Dalhousie assisting on all three Tiger’s goals. Rebecca Sweet and AUS Rookie Team member Fielding Montgomery scored in regulation to build a 2-0 lead.
Carolyn Campbell and Laura Grant scored for the X-Women in the middle stages of the third period to push the game to overtime.
The X-Women were without the services of high scoring forward Catie Gavin and All Conference defender Marilynn Hay.
Tigers Goaltender Emelie Edefors, one of several seniors being honoured at the Dalhousie Memorial Arena, made 23 saves for the home team.
In late November the Tigers had 7 wins and were looking like serious contenders when they travelled to Antigonish for a showdown with the X-Women just before Christmas break. St. FX won that game 4-2 and the teams went in drastically different directions after the holidays.
The X-Women have only lost 3 games this term, all in overtime, with 2 of the losses coming to conference rival Moncton. St FX will be the second seed at AUS championships in Moncton and have a banner in their sights, despite being already assured of a spot at CIS nationals. The X-Women are hosting the event at the Oland Centre in Antigonish from March 11-14.
The Tigers have 4 wins and 10 losses in the New Year and will enter the AUS playoffs as the 5th seed. The team has battled injuries and sickness all season, including the swine flu epidemic that ravaged the team in the fall, and a case of mono to Leblanc in January.
The win over the X-Women could provide some rejuvenation for a team once had visions of being a serious contender for the AUS title. The Tigers have struggled mightily from a lack of scoring from players other than Leblanc and Laura Shearer. Leblanc, a first team AUS all star, L finished the season with 34 points; Shearer registered 17 points on route to a 2nd team all conference selection.
The Tigers will open the AUS playoffs with a quarter final game vs. the 4th seeded St.Thomas Tommies. Dalhousie lost 3 of 4 games to the Tommies in the regular season.