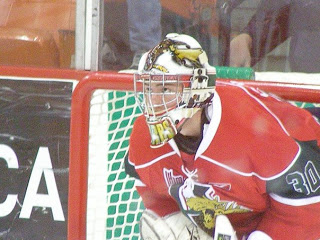 Bad Penalties, Bad Play lead to Herds 42nd Loss
In front of a season low crowd, the Halifax Mooseheads continued with what they do best this season; losing games that they could easily have won. A lacklustre effort for sixty minutes resulted in the Acadie Bathurst Titan winning in overtime, but in all honesty neither team deserved full points from the game.
The Mooseheads have been consistent this season. Consistently bad, and Wednesday night was no change as the young team came out flat and seldom looked dangerous.
Captain Tomas Knotek, enjoying a rich vein of form, was one of the lone bright spots on the night and scored the only goal of the first two periods at 15:47 in the first. The Mooseheads were outshot 19 to 8 in the first frame, and 42 to 27 on the night.
The Titan replied with a goal in the third period to tie the game and stretch out an agonizingly bad game into overtime. It seemed as though both teams would be held scoreless in the overtime effort but continuing the Mooseheads bad luck, Eric Faille added his second of the night with just 55 seconds remaining in the extra frame.
The only other bright spot for the Mooseheads was goalie Mathieu Corbeil, in his fifth start since returning from injury, looked solid all night and made 41 saves in the losing effort. Corbeil was named first star at the end of the game and continued to make a positive impact approaching the draft.
Announced attendance was 4,528 but was affected by the Canada – Russia game and the numbers dwindled as that game kicked off, leaving the Metro Centre almost empty during the overtime period.
Three Stars
3rd – Tomas Knotek – The Czech Forward and Halifax Captain continued to have hot hands and with a goal last night and now has 8 goals and 5 assists in his last 10 games.
2nd – Guillaume Nadeau – The Titan goalie made 26 saves and although looked shaky at times picked up an important win for Bathurst
1st – Mathieu Corbeil – Put up 41 saves on the night and played another strong game to keep the Mooseheads close
The Halifax Mooseheads play their last home game of the season Saturday vs. the Moncton Wild Cats. Game time is 4:00.
Henry Whitfield is an avid hockey enthusiast who covers all angles of the Halifax Mooseheads. Follow him on Twitter @HenryWhitfield for live game updates or get a hold of him at henry.whitfield@gmail.com