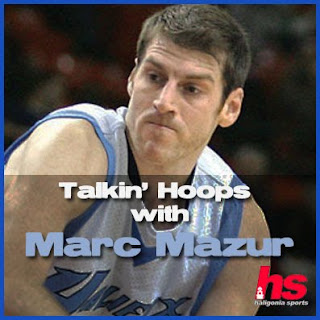 Straight out of the state of Michigan, is the starting centre for the Halifax Rainmen, Marc Mazur.  Marc has fit in nicely with the Rainmen lineup and brings the inside presence that the Rainmen were looking for at the start of the season.  He is a basketball vet who brings basketball experience from all over the globe.  He played with the Manchester Millrats last season alongside current Rainmen teammate, Desmond Ferguson, and has also spent some time in Europe and in the NBA D-League.  I had the chance to talk to Marc about his Halifax experience, a little about Michigan native and Rainmen teammate Desmond Ferguson as well as his thoughts on the greatest basketball players to come out of Michigan.
__________
Romy (Haligonia.ca): So off the top, let’s get this straight. How do you pronounce your last name? Is it pronounced MAY-ZER? Or MAHZ-OOR?
Marc Mazur:  I’m used to people messing up some part of my name, but my last name is pronounced MAIZE-ER. A lot of people just call me Maze for short.

Romy (Haligonia.ca): First of all, welcome to Halifax. You’ve had the opportunity to play professional ball all over the place including stops in the NBA D-League and overseas, how has the Halifax experience been like so far?

Marc Mazur: It’s been a good experience. The team and the community have been great. I think Halifax has a tremendous fan base and there aren’t many places in minor league basketball that have this kind of support. I’ve played games in the minors, and also overseas, where you can literally count the amount of fans in attendance. So playing in front of a good passionate crowd every home game is certainly a blessing, and as a player, it makes for a great experience. I’m thankful for this opportunity

Romy (Haligonia.ca): Has there been a big transition for you moving to Halifax or have you played in similar cities? Does the Canadian money throw you off with all these loonies and toonies?

Marc Mazur:  I’ve been living in Southern California for the past four years, so the biggest transition for me has been getting adjusted to cold weather, that’s basically it. I’ve learned to adapt to almost any situation, no matter where I’m at, but it’s been easy here in Halifax. Being originally from Michigan, when I was younger, my friends and I would make frequent trips to Windsor, so I am familiar with the loonies and toonies, so it was a smooth transition. 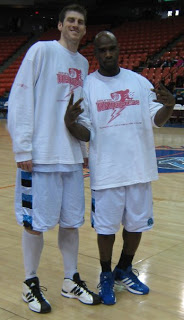 Romy (Haligonia.ca):  This Rainmen team is really clicking this year, what have been some of the key factors to this success?

Marc Mazur:  I think the organization brought in a great mix of guys who understand how to play winning basketball, who are unselfish, and who play hard and love to compete. I think we have a good mix of veterans and young players. We have players that are starting to understand their roles and are playing within themselves. With that, I think it allows us to be a very versatile team and it makes us a very difficult matchup for opposing teams. I think we have all the makings of a championship team, but in order to to compete for the championship, we need to be focused every game and concentrate on our execution and continue to keep playing great defense in the second half of the season.

Romy (Haligonia.ca): Including your time at the University of Detroit, your career has spanned about 10 years, what has been your greatest accomplishment during this time?

Marc Mazur: Because of basketball, I’ve been fortunate enough to be able to travel and play in over 18 countries, and each has been a unique experience, it’s been great traveling and learning and living within different cultures. You really learn a lot about yourself. Basketball wise, winning two NBDL championships was great. But, I don’t think anything can compare to my college experience. I was fortunate enough to play on some great teams at UDM. While I was there we won conference championships, played in the NCAA tournament, advanced to the Final Four of the 2001 NIT, had the nation’s longest home winning streak of 41 straight games (undefeated for over 3 years), beat major programs such as UCLA, UCONN, Butler and a few others, and we were constantly one of the best defensive teams in the nation during my four years there. And being named team MVP my senior year was a great personal accomplishment for me because of my role and all the great players we had on these teams.

Marc Mazur: Good? As in embarrassing? No, I don’t have too much on Dez. Most of those types of stories involve former teammates, friends and coaches that we like to make fun of or imitate. We’ve played with quite a few characters throughout the years. But on the court, I will never forget him hitting 10 three point shots on his senior day at UDM. He was hitting them from a few steps inside half-court. It was one of the best shooting performances I’ve ever seen.

Romy (Haligonia.ca): You were born in Pontiac, Michigan. Who are the top five players to come out of the state of Michigan?

Marc Mazur: I won’t list the best, because I’m bound to leave someone great off, so I’ll take the easy way out and give you my five favorite: Magic Johnson, George Gervin, Glen Rice, Jalen Rose, Chris Webber.

Romy (Haligonia.ca): Were you a big Detroit Pistons “Bad Boys” fan growing up?

Marc Mazur: Of course! That was the early 90’s, and I’ll admit it, I had my “Hammertime” Pistons t-shirts. That was around the time I started gaining interest in basketball. I would watch them every time they were on TV, and I grew up watching that type of basketball and wanting to emulate the “Bad Boys”. To this day I can’t cheer for the Chicago Bulls, and living in California, I just recently got over my Laker hatred.

Romy (Haligonia.ca): Now, who’s the best musical artist to come out of Michigan? Is it Kid Rock, Eminem, or am I way off base?

Marc Mazur: I love music, and Michigan has a great musical history, so I have to say that your way off base. I have to go with some of the original Motown artist such as Stevie Wonder, Smokey Robinson, and The Temptations. They put Michigan/Detroit on the music map. But, I also love artists such as Bob Seger, and as you mentioned, Kid Rock and Eminem.

Romy (Haligonia.ca): Has Devon Norris introduced you to the donair yet? If so, let’s hear your opinion.

Marc Mazur: You know, I have had different versions of the donair throughout my travels in Europe, but I haven’t had the chance to get one in Canada. I heard that Halifax was the originator and has the best donairs. I’ll have to give it a try real soon.
__________

Thanks to Marc for taking part in our Q and A, you can find Marc at the Halifax Rainmen home games and at his website MazeBasketball.com