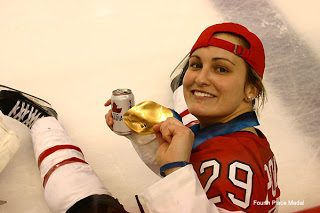 So the gold medal champions in Olympic women’s hockey had a beer. WOOPdeEFFINdo.

One of the last things I saw before I went to bed last night was a twitter post from Greg Wyshynski, the editor of Puck Daddy hockey blog. “Marie-Philip Poulin, with Olympic gold and a Molson. Canadian bliss” (Accompanying the tweet was the the photo you see at the top of this blog post).


I had a laugh and thought, ‘well deserved, ladies’.

That tweet was followed up by “Hope all this ‘Marie-Philip Poulin is underage!!!’ stuff is in good fun. Otherwise, our world’s been taken over by Debby Downers & Killjoys”

I didn’t think much would come of the underage stuff, but then CTVOlympics.ca reports that “Gilbert Felli, the IOC’s executive director of the Olympic Games, said he wasn’t aware of the celebration until informed by a reporter with The Associated Press“


Who is this douchebag reporter from AP who felt it necessary to be the Debby Downer? Haven’t you given a glass of wine or champagne to your teenager at special events? She won a freaking gold medal… she scored the only two goals in the game. Let her have a freaking beer. I mean it wasn’t even good beer. It was a Molson.


But instead the IOC has to be all fatherly.

“If that’s the case, that is not good,” said Felli about the celebration. “It is not what we want to see. I don’t think it’s a good promotion of sport values. If they celebrate in the changing room, that’s one thing, but not in public.”

What’s the difference between what the girls did, and skeleton gold medalist Jon Montgomery chugging a pitcher of beer in front of a big crowd in Whistler on national television? I believe an open-liqour-in-public fine in Vancouver runs around $230. Beer chugging… sport values… right. But none of us cared, we all thought it was awesome and fun. Why? What’s the difference? Why are people outraged about what the women did?

Is IOC members flying first class around the world, being wined dined and bribed a good promotion of sports values? Just sayin’.

Here’s another one to chew on.

What’s the difference between the girls having a beer on the ice after everyone’s left. And the fans getting absolutely trashed in the stands? Did I mention that all the fans were gone? 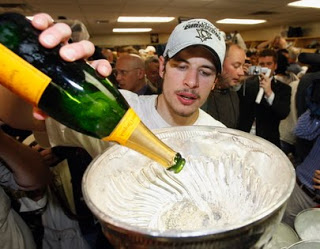 Ironically this is a photo by the Associated Press.

Consistantly media are allowed in the dressing room after a big win. Stanley Cup, Super Bowl, World Series… shall I go on? When have you not seen shots of players popping champagne. What’s the difference there?

These athletes are people. People drink. To say that because they are athletes means they should drink is ludicrous.

This ‘controversy’ if you can call it that… is ridiculous! They had a beer. End of story.