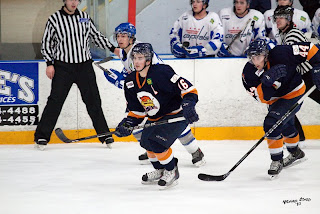 Capitals Score 6 Unanswered Goals, Pull Away on Halifax
For the second time in two months the Summerside Western Capitals walked into the forum and laid a beating on the Halifax Lions.
The Capitals scored 6 unanswered goals after falling behind 4-3 early in the second period to pull away from the Lions and cruise to a 10-6 victory last night in MJAHL action at the Forum.
Summerside led 9-4 well into the late stages of the third period before the teams exchanged goals in the closing minutes.
The Lions began the game with a frenzy as Brendan Taylor and Justin Belanger scored in the opening few minutes as it appeared Halifax was going to build on their 3-2 victory over the Capitals last week in Summerside.
But Chad Earle, Nathan DesRoches, and Neil Sherrion scored in the middle stages of the opening frame to give the Capitals the lead. Kyle Dilosa scored on the power play for the Lions near the end of the period to tie the game after one.
Blake Hayes scored for the Lions on a delayed penalty to start the middle session, but the Capitals would score six straight through the second and third periods to slowly build an insurmountable lead over a sluggish looking group of Lions that appeared disinterested and dejected at times.
Heavily used goaltender Kody Bloise had his worst start of the year and was replaced in the third period by Ben Clarke. Brendan Taylor had 1 goal and 3 assists and Robbie Veriker added 3 assists for the Lions.
Earle, DesRoches, Will Johston, Cole McMillan, and Lance Pridham each scored 3 points for the visiting Capitals. Summerside improves to 19-16-2 with the victory.
Halifax drops to 16-17-5, good for 4th place in the Bent Division.
Things get harder for the Lions as they now travel to Woodstock to play a Slammers team that has only lost 1 game in regulation this season. The puck drops at 7:30 and the game can be seen on fasthockey.com.
Notes
The Lions have played the juggernaut Woodstock Slammers very tough at the Forum this season, losing 1 game in overtime, and another 5-3…….The Lions have created some separation from Amherst and Yarmouth in the bottom tier of the Division. Halifax is 3 points ahead of Amherst and up 5 on Yarmouth. The Lions also have 3 games in hand on the Ramblers…..Summerside outscored the Lions 20-8 in their two visits to the Forum this season……Halifax is nearly at the end of a brutal stretch in the schedule that will have them playing their 13th game in 22 days tomorrow night in Woodstock……Kyle Dilosa did not see any ice time for the Lions in the third period. Dilosa had been reunited with Brendan Taylor in the first 2 periods…….Taylor now has 34 points in 21 games…….the Lions held an extremely successful fundraising auction last night. Word is the event brought in $15,000!