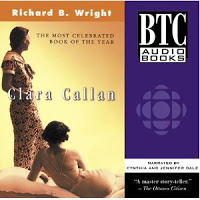 Way back in 2001 Richard B. Wright’s Clara Callan (M) swept Canadian literary awards winning the Giller Prize and the Governor General Literary Award for Fiction. Wright uses letters and diary entries to relate five years in the lives of sisters Clara and Nora Callan.
Clara Callan is a poetry loving school teacher in Whitfield, a small town in rural Ontario. It is the 1930’s and World War 2 is brewing in everyone’s future. Clara’s younger sister Nora has left Whitfield to pursue a career in a radio soap opera in New York City. Clara is the mature older sister who stayed behind and lead a predictable and safe life, while Nora, the free-spirited younger sister, breaks free from small town scrutiny and censure. Left alone after the death of her father, Clara has a spiritual crisis and loses her faith in God. A violent encounter with a stranger leaves her pregnant and she turns to Nora and her friend Evelyn for help. This is the pivotal event that changes Clara’s life that moves her forward and allows her to take greater risks with her personal life. 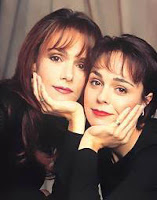 Sisters Cynthia and Jennifer Dale narrate this abridged version of Clara Callan. They do an excellent job capturing the mature and thoughtful Clara and the flighty and bouncy Nora. An added surprise was the inclusion of Janet Wright (Emma Leroy of Corner Gas) as cynical friend Evelyn. Her voice was immediately recognizable and has a perfect husky quality for Evelyn’s caustic personality. Sometimes an abridged audio book can leave you with feeling that you missed out on something, but not so here. The story felt complete to me, however, I think I will at some point read this one in its full version.
Although this is a quiet and reserved story, the epistolary format made in compulsively readable (or listenable). Books written in diary or letter format have a certain intimacy that draws you in.

A more recent example would be Tatiana de Rosnay’s The House I Loved (M). “Paris, France: 1860’s. Hundreds of houses are being razed, whole neighborhoods reduced to ashes. By order of Emperor Napoleon III, Baron Haussman has set into motion a series of large-scale renovations that will permanently alter the face of old Paris, moulding it into a “modern city.” The reforms will erase generations of history—but in the midst of the tumult, one woman will take a stand. Rose Bazelet is determined to fight against the destruction of her family home until the very end; as others flee, she stakes her claim in the basement of the old house on rue Childebert, ignoring the sounds of change that come closer and closer each day. Attempting to overcome the loneliness of her daily life, she begins to write letters to Armand, her beloved late husband. And as she delves into the ritual of remembering, Rose is forced to come to terms with a secret that has been buried deep in her heart for thirty years.” publisher

Listen Up! Clara Callan by Richard B. Wright
https://haligonia.ca/listen-up-clara-callan-by-richard-b-wright-59190/