Home / Life / Couchtime With Jill / The Amazing Race – Flow It, Show It, Long As God Can Grow It 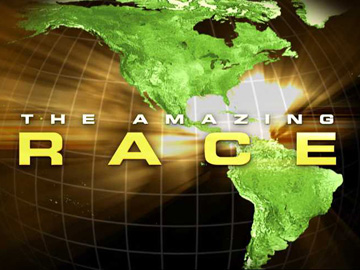 The Amazing Race – Flow It, Show It, Long As God Can Grow It

The drama began early on The Amazing Race this week when, almost first thing in the episode, Brendon and Rachel headed for the Fast Forward and found out it would mean shaving their heads.

Rachel immediately began crying, saying “I paid $500 for extensions,” and asking Brendon “Do you want me to shave my head?”

So, yeah. They didn’t go through with it. Later, Rachel said that the previous woman who’d shaved her head on the race had been skinny and pretty, but that she needs hair to be pretty. As much as I hate Rachel, I thought it was kind of sad that crappy self-esteem was what held her back from doing the Fast Forward. Oh well. I guess even winning a million bucks for a second time won’t solve all her problems. (Though it would help her afford rhinoplasty, if that’s what’s really bothering her…)

Meanwhile, Rachel and Dave, Art and J.J. and Vanessa and Ralph headed to the Roadblock where they had to use coconut husk to spin into rope. Brendon and Rachel joined them there before Bopper and Mark had even left the Pit Stop – so I was really hoping they might

Dave was the first to complete the task, followed closely by Ralph.  He and Vanessa took off for their next location when Vanessa tripped and fell. I felt for Vanessa, since this morning I face-planted outside my local coffees hop. As I’m writing this review, I’ve got ice on a majorly swollen broken toe, a band-aid barely covering a bloody knee, and ice on an egg on my knee. So I know what a bad fall can do. But Vanessa wasn’t too hurt, and she’s tough enough to get up and keep running.

At the Roadblock, Rachel was feeling guilty about not shaving her head, but she stuck with her decision and eventually Brendon finished the task. I would have shaved my head – I mean, it’s a huge advantage very late in the game, that’s a big incentive – but with Mark and Bopper so far behind I can see why they’d feel secure.

I do wonder, though, if Art and J.J. should have bailed on the Roadblock and gone for the Fast Forward themselves when they found out that no one had gone for it and it was only head-shaving. I think they should have.

Before starting the typical tasks, Mark and Bopper had to complete their Speed Bump – it was pretty easy, all they had to do was paint a tiger face on a man’s stomach.

In the Detour, teams had to choose between “Pack a Box” in which they’d fill ten boxes with ginger to the right weight and then deliver it, or “Pachyderm” in which they’d decorate an elephant and then load a truck with 15 wheelbarrows of manure.

Like Vanessa, I’m a HUGE elephant lover and would have gone for that task. Plus, it’s the most photogenic of the options which can sometimes mean easiest, and anytime you’re asked to deliver something it can mean trouble. So I thought “Pachyderm” seemed like the easier task, and the results proved that it was.

All three couples teams went for Pachyderm, but Art and J.J. went for Pack a Box.  It was hard to get into the episode at this point, since Mark and Bopper were so far behind. I knew the only hope for an exciting episode was if they decided to risk it and go for the Fast Forward…and they did! Just like that, the episode became a bit more intriguing.

Rachel and Dave and Vanessa and Ralph were first to complete the Detour, so they headed off to catch a ferry to the Pit Stop, but Brendon and Rachel weren’t far behind. While Rachel and Dave caught a ferry, the other two couples were stuck waiting for the next one. Meanwhile, Art and J.J. were still sifting ginger. They definitely chose the wrong one.

Rachel and Dave made it to the Pit Stop in first place, winning TEN GRANDE each. Um, you could buy a pretty damn good wig with that money. Instead, Brendon and Rachel came in in second place with Vanessa and Ralph right behind them in third. There was a lot of drama on the mat when they got there – Phil asked something about a penalty, and Vanessa said she thought Team Big Brother had miscounted their barrels. They hadn’t, and it was just an excuse to bring up all the stupid drama between the two ladies. What a waste of time.

I loved Mark and Bopper’s reactions when they found out that all they had to do for the Fast Forward was shave their heads. They cackled at the idea of Rachel shaving her head – good call, boys, she did indeed refuse it!

The editing created some suspense about who would get to the mat first, but not enough. Art and J.J. had finished their Detour slowly and got stuck in traffic, but I still figured they were ahead of the guys. They arrived at the Pit Stop in fourth place, and I’ve got to say I was disappointed. I was hoping the boys from Kansas would be able to pull it off.

I knew they weren’t likely to win, but they sure were fun to watch. Now that they’re out, I’m not sure I care who wins as long as it’s not Big Brother. All of the remaining teams have bothered me at one point or another. What do you guys think?